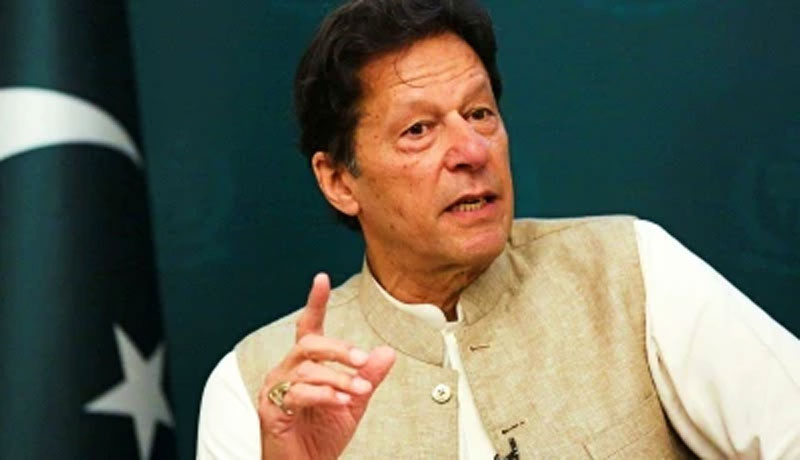 Prime Minister Imran Khan Friday said Pakistan is pushing for a political settlement in Afghanistan before foreign troops leave later this year, to reduce the risk of civil war in its western neighbour.

The United States has said it will withdraw all its troops from Afghanistan on Sept. 11 after a two-decade presence. More than 20 allied countries plan to follow suit.

“There is a lot of fear right now in Pakistan and I assure you that we are trying our level best that there is some sort of political settlement before the Americans leave,” Khan told Reuters at his official residence in Islamabad. “Since the moment the Americans gave a date, of when they were going to leave Afghanistan … the Taliban feel they have won the war,” Khan said, adding it was not going to be easy to get concessions from the Taliban after US decision.

Khan said Pakistan would suffer the most, after Afghanistan itself, if there was civil war and a refugee crisis. “And then there would be pressure on us to jump in and become a part of it,” he said, adding that his government has changed Pakistan’s decades-long policy of pushing for ‘strategic depth’ in Afghanistan to ensure that there was a friendly government there. “Any Afghan government chosen by the people is who Pakistan should deal with,” he said, adding that Pakistan ‘should not try to do any manipulation in Afghanistan’. He said a lot depends on US special envoy Zalmay Khalilzad, with Pakistan’s and Afghanistan’s help, to carve out a settlement to avoid more bloodshed.

Imran Khan said that Pakistan is ready to restart talks with arch-rival India if Delhi provides a roadmap towards restoring the previous status of the disputed Himalayan region of Kashmir. “If there is a roadmap, then, yes, we will talk,” he said. “Even if they give us a roadmap, that these are the steps that we will take to basically undo what they did, which is illegal, against international law and United Nations resolutions… then that is acceptable,” he said.

Khan said he has always wanted a ‘civilised’ and ‘open’ relationship with India. “It is common sense that if you want to reduce poverty in the subcontinent, the best way is to trade with each other,” he said, referring to the example of the European Union.

He said India has crossed a ‘red line’ by revoking the autonomy of its part of Kashmir. “They have to come back for us to resume dialogue,” he said, adding, “at the moment there is no response from India”.

Separately, Pakistan, China and Afghanistan have opposed any attempt to impose a government in Afghanistan, in an apparent reference to growing concerns among Afghanis that the Taliban are trying to take control of the country in the wake of withdrawal of foreign forces.

Foreign Minister Shah Mahmood Qureshi, State Councilor and Chinese Foreign Minister Wang Yi and Afghan Minister of Foreign Affairs Mohammad Haneef Atmar had a comprehensive and in-depth exchange of views on Afghanistan’s peace and reconciliation process. “The three sides reiterated that they do not support the establishment of any government imposed by force in Afghanistan. The three sides supported Afghanistan to be an independent, sovereign and democratic state that enjoys security and stability, achieves development and prosperity, and lives in harmony with its neighbors,” according to a joint statement released on Friday.

The statement said the three sides underlined the importance of a peaceful resolution to the conflict in Afghanistan and called on all parties in Afghanistan for an early declaration of a comprehensive ceasefire and an end to the senseless violence, in order to create the conditions needed for negotiation between the Islamic republic of Afghanistan and the Taliban.

The foreign ministers held the Fourth China-Afghanistan-Pakistan Trilateral Foreign Ministers’ Dialogue via video link on Thursday and urged the Taliban to return to the political mainstream of Afghanistan in accordance with a resolution of the United Nations Security Council.

“The three sides underscored that as insecurity in Afghanistan will directly impact the stability and economic prosperity of the entire region, there is a need for joint efforts and response to eliminate the current challenges in our region,” the statement said. They noted the start of withdrawal of foreign troops from Afghanistan, and believed that while this move has complex impacts on Afghanistan peace and reconciliation process, it will also provide opportunities for Afghanistan and the region to truly take the future of their countries and nations into their own hands.

The three sides called for responsible and orderly withdrawal of foreign troops to avoid deterioration of the security situation in the region or giving terrorist forces the opportunity to re-emerge and grow, adding all relevant parties should earnestly fulfill their anti-terrorism commitments and agreed not to allow any terrorist to operate from their respective territories against each other’s interests.

The three sides maintained that resolution of the Afghan issue should fully reflect the “Afghan-led, Afghan-owned” principle and that the Afghan government could play a leading role in Afghanistan’s peace and reconciliation process to draw up a plan jointly with all parties that reflects extensiveness and inclusiveness.