ISLAMABAD: The Pakistan Muslim League-N, with its 15-page ‘Sinking Economy’ under Imran Khan, took the federal government to task over the economic policies, saying the prime minister has ‘no knowledge’ of the basics of economics as he makes ‘decisions in line with advices from courtiers.’

Addressing a pre-budget seminar, former prime minister Shahid Khaqan Abbasi said that as many as five million people have become unemployed during the three-year tenure of incumbent government. He said that the PTI-led government has pushed 20 million people into poverty and has heavily burdened people by increasing price of electricity by more than 62%.

The PMLN had taken out 20 million people out of poverty when it was in power, he said, adding that financial losses due to line losses and electricity theft have gone up to 4.5%. He said that the Sui Northern Gas Pipelines Limited and the Sui Southern Gas Company Limited were ‘bankrupt’ today.

The former prime minister said that the country’s biggest issue was circular debt, as Pakistan’s economy has shrunk by $19 billion in the last three years. He said that even with the impact of coronavirus on the economy retroactively applied to the PMLN government’s economic indicators, the common man’s income would have risen by 25%.

“People have received the gift of inflation through a stolen election,” he said, implying that the general elections of 2018 were rigged. On the occasion, former finance minister Miftah Ismail said that the current regime was toying with the economy and said it had increased loans of the government and state institutions by Rs45,000 billion.

He said that Imran Khan even takes food for ‘langar’ as part of its feeding the poor initiative from a non-government organization. He said that the fiscal deficit during Imran Khan’s tenure in 2019 stood at Rs3,829 billion, while it moved up to Rs3,892 billion in 2020. He claimed that Minister for Finance Shaukat Tarin also ‘admitted’ that an ‘increase in interest rate increases debt.’

During PML-N’s tenure, the fiscal deficit stood at Rs1,500 billion, and now it was at Rs3,500 billion, he said, adding that the Federal Bureau of Revenue’s collection has also fallen to Rs3,897 billion. The former finance minister said that if FBR has crossed the Rs4,500 billion mark, it was no great achievement for PTI and this was the target for 2019.

Addressing the seminar, former Sindh governor Muhammad Zubair said that four finance people have held the Finance Ministry’s portfolio during this government’s tenure. “Where are those 200 people who claimed they could fix the economy,” he questioned. Criticizing the government, he said that the prime minister had sacked PTI’s ‘poster boy’ Asad Umar as the finance minister within a span of eight months. 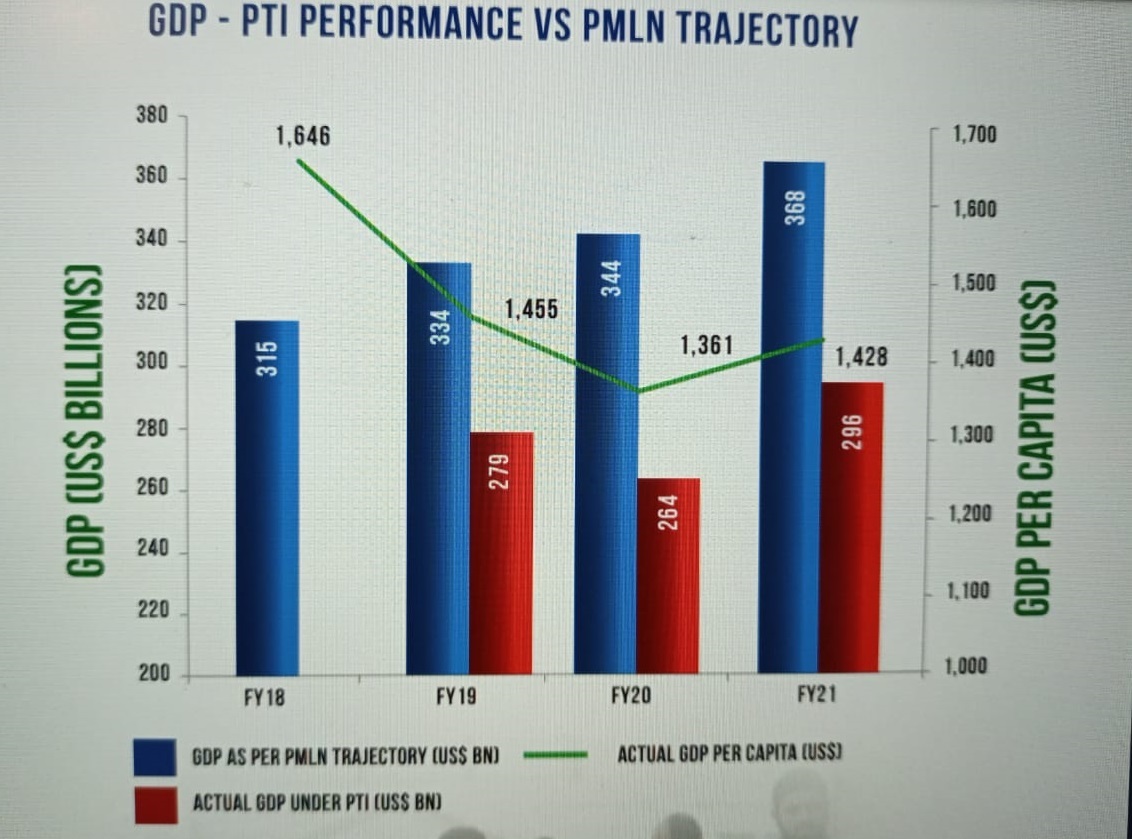 He said that the revenue growth target was set at Rs5.6 trillion, but the government could only reach 3.9 trillion. He said that the government was unaware of what had led to an additional expenditure of Rs800 billion. Before coming into power, the PTI had vowed to end corruption and unemployment in 90 days, he said, adding that it was still intact after 3 years and on the rise.

In PTI’s three years, two finance ministers were from PPP, the same PPP whose economic policies Imran Khan would criticise, the former governor said. He also said that the team’s players were changed repeatedly, but now, there was a need to change the captain. Former interior minister Ahsan Iqbal said that PMLN had approved development projects for Chilas and, Mirpur, and Muzaffarabad in 2016, but even after five years, PTI is unable to inaugurate them.

Imran Khan has not been able to start works on projects like Railway ML1 and Keti Bandar, he said, adding that meetings of the China-Pakistan Economic Corridor’s Joint Cooperation Committee (JCC) would occur every six months during PMLN’s tenure. However, “it has met only two times since PTI came into power,” he pointed out.

On Thursday, the Pakistan Muslim League-N came forth with a review on the PTI’s performance, highlighting problems like inflation, unemployment and poverty, calling it ‘sinking economy’ under Imran Khan. According to the opposition party, everyone is experiencing a decline in quality of life whereas they believes they left the economy at the size of $313 billion. 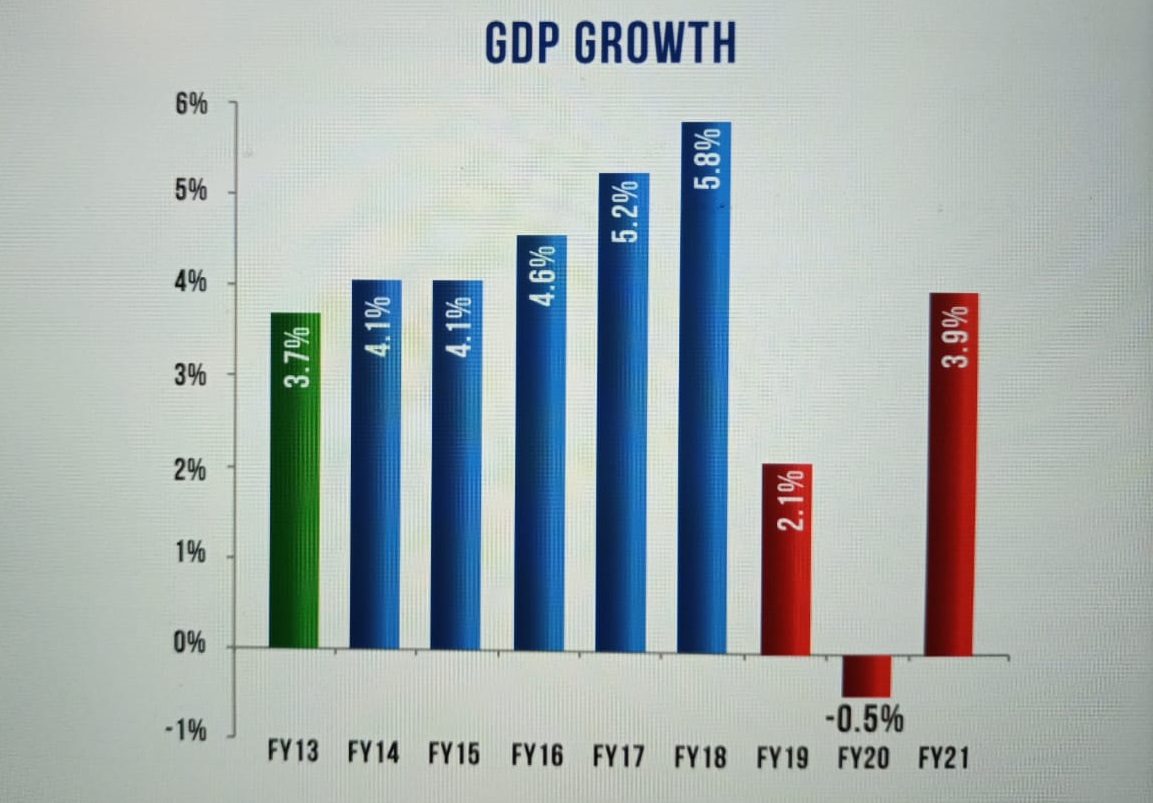 The population has increased 7.5% and is rapidly moving towards further increase. After three years of the government under Imran Khan, the economy is now at $296 billion, reducing the GDP in dollars. In five years, the PMLN increased the economic growth from 2.8 to 5.8%, along with reducing inflation from 11.8 percent to 3.9 percent.

In 2018, the GDP under the PMLN grew by 5.8%, which is known to be the highest in 16 years. Currently, the PTI is claiming that their current growth rate is 3.9% but economists are challenging this figure. The PTI government’s mismanagement and poor policies have led to an increase in the unemployment and poverty. Around five million people have lost their jobs and an additional 20 million are on or below the poverty line.