Pakistan playing due role for peace in world: UNGA 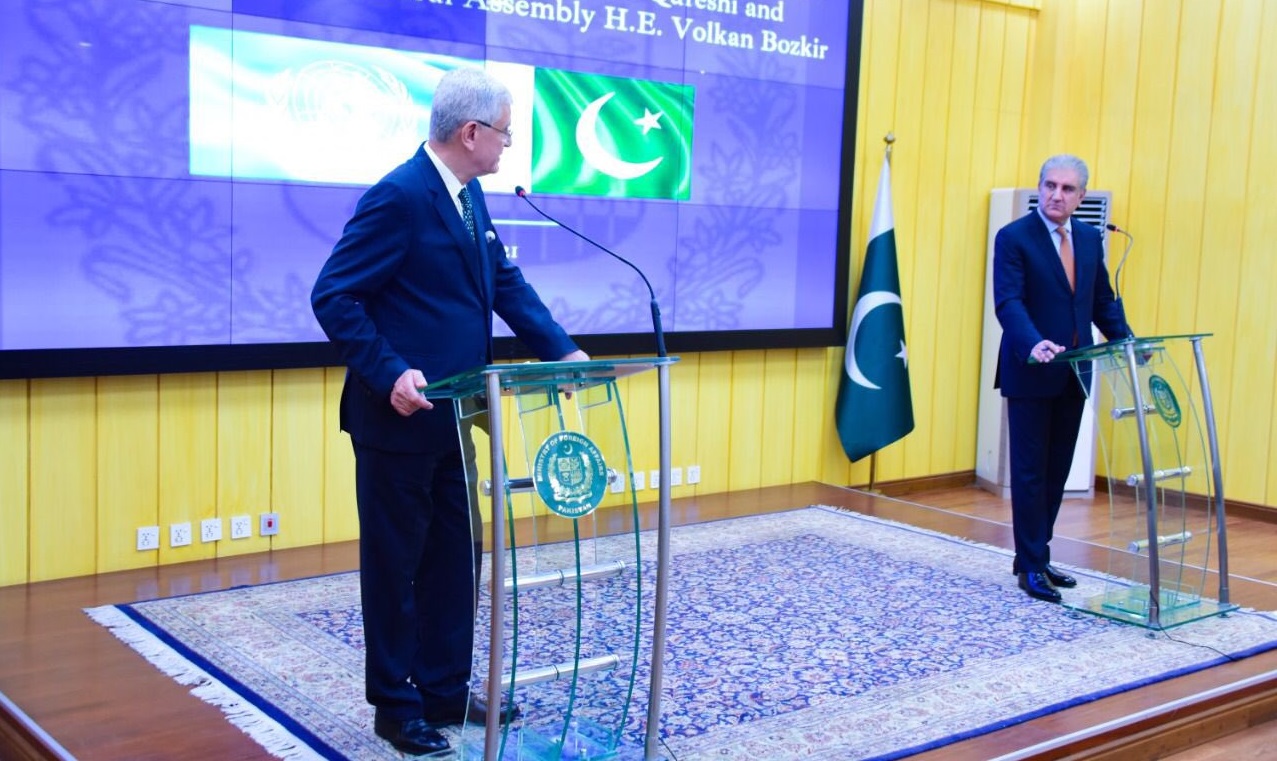 President of the United Nations General Assembly (UNGA) Volkan Bozkir on Thursday said the status of the Jammu and Kashmir dispute must not be changed unless the issue is resolved as per the resolutions of UN Security Council.

Addressing at a joint presser with Foreign Minister Shah Mahmood Qureshi in Islamabad, the UNGA president said the resolution of Jammu and Kashmir lies in implementation of the UN Charter and through peaceful means as decided between Pakistan and India under Simla Agreement. He urged the parties on both sides to ‘refrain from changing the status of the dispute’.

He said the Palestine issue has received more political win worldwide than the Kashmir dispute and suggested Pakistan to bring the Kashmir issue to the UN platform ‘more strongly’.

On Palestine, Bozkir said, “We have captured the momentum and the eye of the storm. When the political structure is ready for something, nothing will stop it.” As president of UNGA, he said, it is his duty to remain impartial, however added that impartiality can be defined in other words. “For the case like Palestine, I think that helping people and giving them a just solution to their problem is impartiality,” he said. “Also, the goal of ending occupation and achieving two independent viable states side by sides in mutual recognition to the pre-1969 settlement is important,” he said, adding that inaction on Palestine issue is hurting the UNSC’s credibility.

The UNGA president said Pakistan, along with Turkey, is playing an important role in resumption of peace in Afghanistan, which can have its effects on international and regional basis. He termed Pakistan his ‘second home’ and said that the love between Pakistan and Turkey is not due to any financial reasons, but a connection of hearts. He drew attention towards wearing a green face mask and necktie, as a gesture to honour Pakistan’s national colour and flag.

He mentioned the charisma of Prime Minister Imran Khan and the support he gained at international fora, which he said was important for Pakistan. Bozkir also appreciated PM Khan’s tree plantation campaigns and the ambitious 10 billion tree project. On the ongoing UN Security Council reforms, he stressed a balance among the UNGA, UNSC and the secretary general.

Foreign Minister Shah Mahmood Qureshi said in a meeting with UNGA President Volkan Bozkir, he briefed about the dire situation in Indian Occupied Jammu and Kashmir and drew his attention on the similarity of Palestine and Kashmir disputes. “Both Palestinians and Kashmiri demand self-determination and protection from demographic destruction and violation of human rights. The UN must play its role in honour of its own pledges,” he said.

He said Kashmir dispute was a reality which could not be ignored or erased from the UN agenda. He warned that the simmering situation of Palestine and Kashmir could blow into a fireball in the Middle East and South Asia.

To a question regarding Pakistan’s position on the stance of Israeli prime minister Benjamin Netanyahu, he said at the very important meeting of Human Rights Council taking place in Geneva, Pakistan’s ambassador Khalil Hashmi would move a resolution on Israel’s war crimes and genocide. He expressed confidence that the western societies that believed in human rights would actually take concrete steps to draw the attention of International Criminal Court (ICC) on human rights violations and war crimes, taking place in Gaza and Western Bank, where the holy site of three religions – Islam, Judaism and Christianity, was situated.

Qureshi said on Palestine, the first milestone had been achieved, adding that “as a Muslim Ummah, we look towards revival of peace process as fire was not fully extinguished.” He said dialogue, peaceful co-existence and a Two-State option in accordance with the UN resolutions was the only sustainable solution.

Prime Minister Imran Khan also had a meeting with PGA Bozir in Islamabad today, the Prime Minister’s Office said in a statement. A wide range of issues was discussed during the meeting pertaining to regional and international peace and security, sustainable development, and economic recovery efforts in the wake of the Covid-19 pandemic. Views were exchanged on key items on the UN agenda such as Palestine, the Jammu and Kashmir dispute, the Afghan peace process, and illicit financial flows from proceeds of crime, corruption, and bribery, the statement said.