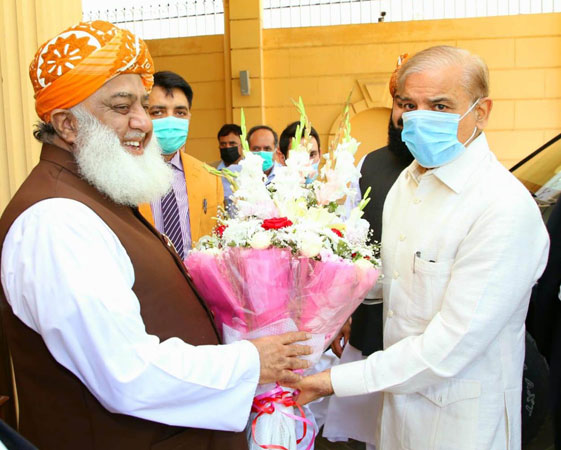 Pakistan Democratic Movement (PDM) chief Maulana Fazlur Rehman Tuesday said the PPP and ANP can rejoin the alliance if they tender an apology to the anti-government movement for going against its decisions, a private TV channel reported.

Addressing a press conference after a meeting with PML-N President and Leader of the Opposition in National Assembly Shahbaz Sharif at his residence in Lahore, Fazl said both PPP and ANP have been given sufficient time to get back to the PDM leadership but they have not done so. “There are currently no proposals to invite PPP and ANP at the PDM meeting on May 29,” he said. “However, during the meeting, the leaders will decide the future of PPP and ANP in the alliance,” he added.

On April 6, the ANP, and on April 11, the PPP had parted ways with the PDM after the latter served it a show-cause notice – as PPP had gotten Yousuf Raza Gilani appointed as the leader of the opposition in Senate, going against PDM’s decisions, and ANP supported it. PPP was asked to explain its move to get appointed its candidate, Gillani, as leader of opposition in Senate, without first obtaining the consent of parties of the Opposition alliance.

ANP, on the other hand, was issued a notice for supporting the PPP in its efforts to get Gillani designated by roping in senators from the government’s ally Balochistan Awami Party (BAP) to complete the numbers required.

In Islamabad, PML-N Vice President Maryam Nawaz told reporters that there is no new opposition alliance and neither the position of PDM has changed. She claimed that PML-N does not need support of anyone as it already has more than enough members to bring change in Punjab and send provincial government packing. Lashing out at Pakistan Tehreek-e-Insaf (PTI) government, the PML-N leader said that government is manipulating growth statistics while people have been devastated and they are cursing the government. Every section of society has been affected by rising inflation, she added. Maryam Nawaz also rebuffed reports of divisions in the opposition alliance and said that Shehbaz Sharif hosted dinner for opposition parliamentarians as Opposition Leader in National Assembly. A meeting of PDM will also take place in a day or two, she added.

Meanwhile, PDM Secretary General Shahid Khaqan Abbasi categorically stated that there was no place for the PPP within the opposition alliance until it restores the trust it had betrayed.

Speaking to the media in Islamabad, the PML-N leader said that PDM had not extended an invitation to the PPP. “PDM Chief Maulana Fazlur Rehman has clearly stated that [the PPP] needs to review its decisions. They need to restore the trust that they have betrayed.”

He said the opposition alliance was formed for a particular purpose. “If you are not committed to trusting the movement, then there is no place for you within the PDM.”

Asked whether he would resign as secretary general if the PPP rejoins PDM, Abbasi said, “The PPP can’t just rejoin the movement. They can only do so once they restore their trust in the PDM. The alliance does not have a revolving-door policy that you break its trust, leave the movement and try to come back again when you face difficulties. The door is closed. The door will only open when you rebuild the trust,” he said. He added that the PDM had sought a response from the PPP, which Chairman Bilawal Bhutto-Zardari had torn into pieces. “We had asked for a response. Join together the torn pieces [of the show-cause notice], read it and give us the clarification we had sought,” he said.