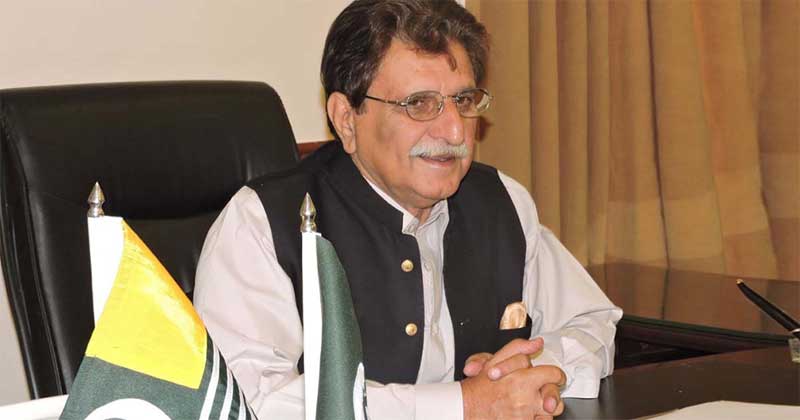 MUZAFFARABAD: Azad Jammu Kashmir (AJK) Prime Minister Raja Farooq Haider Khan on Friday led a public rally here at the Lal Chowk to express solidarity with the Palestine and Kashmir to condemn Israeli and Indian atrocities.
The rally was attended by a large number of people Minister Education Barrister Iftikhar Gilani, Sahibzada Saleem Chishti and Mufti Kafait Hussain Naqvi chanting anti Israel slogans holding placards and banners inscribed with demands to United Nations to take cognizance of atrocities and play its role for resolving the Palestine issue.
Raja Farooq Haider while addressing the rally said that the Palestine day was being observed throughout the country to condemn Israeli atrocities against Palestinians and express solidarity with them. He said the Muslim world must unite against Israeli atrocities against Palestine people and should take serious steps for the resolution of Palestine issue in accordance with United Nations, resolutions and also to take unanimous stance at international forums.
While praising the strongest stance taken by the governments of Turkey and Iran on the issue, the prime minister demanded the other governments of the Muslim countries to follow the both governments in order to exert pressure on Israel. He expressed gratitude of other civilized countries for condemning Israeli atrocities on Palestinians and strongly condemned those countries that supported Israeli atrocities and demanded the United Nations to resolve the Palestine and Kashmir issue for a peaceful world.
Farooq Haider also demanded the organization of Islamic countries (OIC) to play an effective role the resolution of Palestine issue to achieve the objectives of its constitution as its basic objective was to safeguard the holy place of the Muslims and that couldn’t be achieved yet. He said India was also following footsteps of Israel in occupied Kashmir and was engaged to the demography of the state and termed the Israeli and Indian prime ministers as two sides of a single coin.