‘Army of the Dead’ 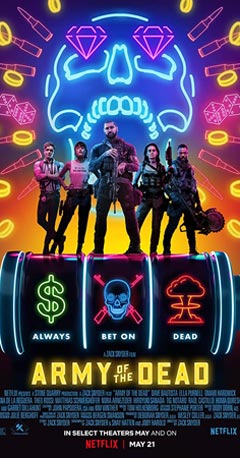 If you go to see just one movie this year, Zack Snyder’s “Army of the Dead” might be the ticket — not because it’s the best movie you’ll see in 2021 (or maybe even this week), but because it’s a stylishly grandiose, muscular but conventional popcorn pageant that’s got something for just about everyone. It’s a zombie movie. It’s a heist thriller. It’s a sentimental father-daughter reconciliation story. It’s set in Las Vegas (albeit it the bombed-out dystopian ruins of Vegas). It’s got a gifted cast of diverse actors playing plucky renegades. It’s got a spectacular climax featuring a dropped nuclear bomb. A viewer might be tempted to ask: What’s not to like?

The film’s limitation — you knew there was a catch coming! — is that as solid a chunk of oversize diversion as “Army of the Dead” is, most of it still has a kind of second-hand quality. At one point, after our zombie-killer heist squad has entered the trashed streets of Vegas, we see the wrecked but still standing Statue of Liberty, an image it’s hard not to notice without flashing back to the ending of “Planet of the Apes,” a moment that singlehandedly launched the genre of cinematic dystopia. In that fabled scene, the Statue was a haunting remnant of human civilization.

In “Army of the Dead,” it’s just a junked remnant of a copy, and the whole movie is basically like that. Snyder, who shot the film as well as co-writing and directing it, is a master of ballistic staging (the zombies’ heads explode with gratifying rock ‘n’ roll precision), but “Army of the Dead,” even more than Snyder’s 2004 remake of “Dawn of the Dead,” feels assembled from bits and pieces of other, superior pop-culture touchstones.

It’s less roiling than “World War Z,” less ingenious than a good “Ocean’s” film, less all-for-one inspiring than “Guardians of the Galaxy.” Yet it has a pleasing brawn and sweep, and you get caught up in it. As meat-and-potatoes escapism, it’s good diner food served with extra ketchup.

It opens with a desert highway action prelude, set at dawn, in which a U.S. military caravan is toting a mysterious payload. Is it a secret weapon? An alien? When a dissolute, just-married couple slam into the caravan from the other direction, the payload is liberated: It’s a zombie — and not just any zombie, but a new kind of alpha ghoul who can, you know, organize things. He may even have feelings.

The film’s basic playbook, however, consists of the same once-bitten-now-resurrected, kill-the-brain-and-you-kill-the-ghoul rules these movies have been running on for half a century.

“Army of the Dead” has one of Snyder’s trademark ironic slow-motion pop-music-video opening-credits montages, this one set to a neo-Sinatra riff on “Viva Las Vegas,” which accompanies images of a zombie war: teeth-gnashing showgirls crashing a toupee’d loser into a bathtub, zombies in powder-blue tuxes attacking slot-machine addicts, gun-toting mercenaries blasting away at the undead horde.

That sequence is a little movie unto itself, but “Army of the Dead” is about what happens after the war. The zombies have lost and are confined to Vegas, with the city walled off by piles of shipping containers.

The president and Congress have agreed on legislation that mandates the dropping of a nuke onto the city; Vegas, and the zombie threat, will soon be destroyed. But that’s when Scott Ward (Dave Bautista), a burly hero of the war who’s now flipping burgers, gets an offer he can’t resist. Mr. Tanaka (Hiroyuki Sanada), a casino magnate, explains that there’s a vault stuffed with cash in the basement of his double-towered hotel. If Ward can assemble a team to enter the city, fight through the zombies, and liberate the money before that nuke gets dropped, they can take a rescue helicopter parked on the hotel roof and fly off with $200 million.

Bautista, away from his winningly dour opaqueness as Drax, proves a catchy leading brute with a Doc-Savage-as-teddy-bear quality he doesn’t overplay. Scott is estranged from his daughter, Kate (Ella Purnell), and we think it’s because she saw him put a knife through her zombified mother’s head. She joins Scott’s team, along with Cruz (Ana de la Reguara), his fiery ex-flame; Vanderoe (Omari Hardwick), a badass with a funny take-no-prisoners incredulity; Dieter (Matthias Schweigh?fer), an eager young German safecracker who must prove his mettle as a zombie killer; Guzman (Raol Castillo), who knocks off zombies for sport; and Marianne (the scene-stealing Tig Notaro), a chopper pilot who packs a lot of sinew into her cynical rejoinders.

Snyder fills the movie with colorful touches: a one-eyed zombie tiger; the vicious booby traps that guard the safe; dreamy cover versions of “The End” and “Bad Moon Rising”; a quarantine camp that provides a soupcon of cautionary COVID allegory. He also divides the zombies into two castes: the shamblers and the alphas, all led by Zeus (Richard Centrone), who’s like the GEICO Caveman imbued with the gnarly fury of Tommy Lee Jones, and his Queen (Athena Perample), who suggests an undead Maleficent played by Exene Cervenka. These two turn flesh-eating into something operatic.

The plot is an assemblage of whatever-can-go-wrong-will-go-wrong complications. The helicopter is a hunk of junk, the nuke drop gets moved up by 24 hours, and Martin (Garret Dillahunt), the square-jawed soldier Tanaka sends along to look after the operation, is clearly up to no good — he’s got a secret plan that’s a real head game. The film gathers momentum, but its first half is too generic, and the whole thing is a little too long. At Netflix, it seems, a director doesn’t have to wage war to get the Snyder cut.