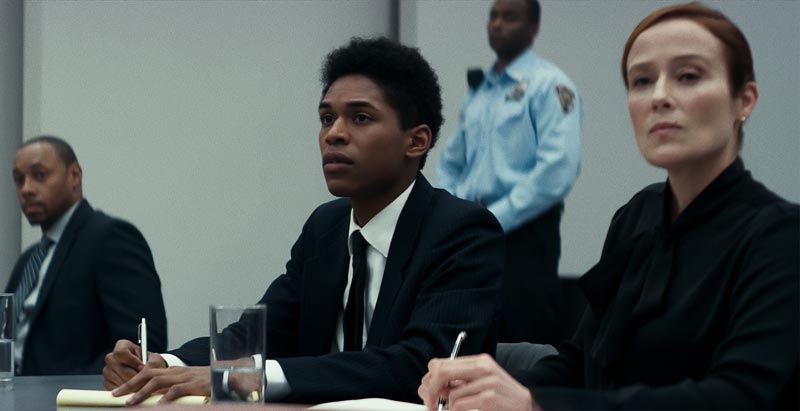 Although it screened back at the 2018 Sundance film festival, stark Harlem-set drama Monster about a black teen swallowed up by a cruel legal system, remains just as timely in 2021, a story of a grim predicament that would probably feel similarly relevant in another three or even six years down the line.

Strange that it’s gathered dust for so long, less a sign of its quality and packed cast and more perhaps of the time of its premiere, nestled alongside two other dramas covering crudely similar ground, finding itself swallowed up by an industry still only willing to give black stories a small piece of the pie.

There was an aborted attempt at a release back in 2019 from a theatrical distributor but now it’s landing where many films with difficult journeys end up landing: Netflix, an overstuffed home that will at least give it the widest possible audience. It’s one of the streamer’s more sombre films of late, as well as one of its most directed, given that it was an acquisition rather than a true original and will duly make a more distracting diversion for those who end up watching, a little gem hidden in the haystack.

Much of the film’s shine can be attributed to a reliably mighty central performance from Kelvin Harrison Jr, whose work to date has continually shown him to be one of the most impressive and commanding young actors working today, equally devastating in dystopian horror It Comes at Night, seat-edge high school thriller Luce and style-over-substance melodrama Waves. Firing on all cylinders once again, Harrison plays Steve, a hard-working student at an elite school, who finds himself charged as an accessory to murder, a bodega robbery gone wrong that leaves its owner shot to death. Steve is accused of being the lookout but he maintains his innocence, even if those within the system are quick to label him guilty. 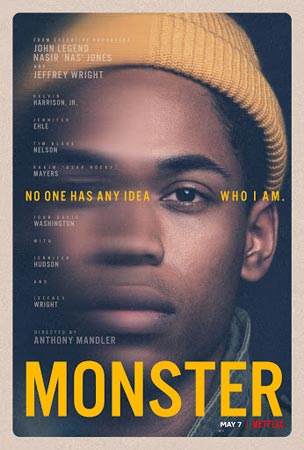 The title refers to the opening statement made by the prosecutor and how he chooses to label Steve, based on a presumed guilt that isn’t just a result of his position within the courtroom but also because of Steve’s race, the idea that a 17-year-old black male is somehow inherently barbaric. It’s the same assumption that’s led to countless state-sanctioned killings or imprisonments, based less on the facts of the case and more the fear that surrounds it and Monster smartly avoids looking at the frustration of the political to focus on the horror of the personal. Just how terrifying would every stage of this process be for a teen? Aside from the harrowing practicalities of life in prison, how would an already fractured time mentally as an adolescent then shatter under this new lens? And how would one then start to view one’s self? The trick for Steve and his lawyer is to turn him into a human for the members of the jury, rather than the stereotype they see him as. Perhaps, depressingly, that same trick is true for first-time director Anthony Mandler, working against members of the audience who might arrive to the film, and the situation, with similar baggage.

Based on the award-winning YA novel of the same name by Walter Dean Myers, Monster is a legal drama less about the twists and turns of the case and more about the nuances of a scenario many would be too quick to judge. The believably messy specifics of what happened and what led to it are hard to explain to a system that demands a strict black and white answer and the script, co-written by The 40-Year-Old Version breakout Radha Blank, does a strong job at using a micro example to showcase a macro problem. It’s also a film about the hopelessness of trying to make others see you as you see yourself when prejudice robs you of a fair trial, whether in or out of a courtroom. Making Steve the son of well-to-do parents living in a luxurious brownstone, attending a top school, is a nifty touch as when it comes to the culture that surrounds him, none of that privilege changes how he’s perceived on a gut level. Harrison’s heartbreaking journey from honours student to suspected accomplice is told in jagged bits and pieces, jumping back and forth to the time before and after the fateful incident. The structure is effective at times but it also robs some scenes of drama, keeping us in the dark in moments when being more informed would have helped. While the script is often remarkably subtle, it’s also remarkably clumsy and the performances too range from the great to the lesser.

It’s in many ways a minor, almost mundane, story with an ending that chooses the small over the big but it resonates just about enough, a quiet scream in the darkness, now able to be heard in living rooms across the world.

Monster is now available on Netflix.