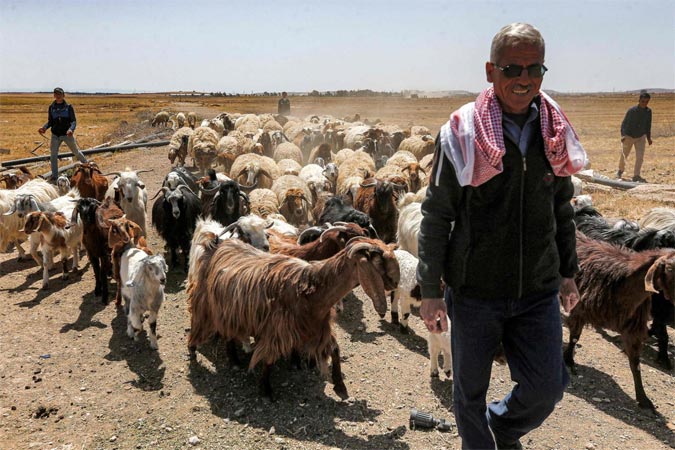 Syrian farmer Mohammad Saasaani grew up grazing sheep in the vast Badia rangelands, but today they are rife with jihadists, a place too dangerous to take the herd.

Like many livestock herders, Saasaani can barely afford fodder for his dwindling flock.

“We’re worried we’d be marching off to die with our sheep,” said the 51-year-old, a prominent sheep breeder in the Damascus countryside.

“We fear landmines, Islamic State group fighters and bandits,” he added, a red and white scarf wrapped around his shoulders.

The Badia, a desert and steppe region which runs from the countryside around the capital to the border with Iraq, was where herders roamed with their animals.

But Syria’s decade-long conflict has turned it into a no-go zone, denying livestock farmers their main source of grazing.

The Badia used to supply 70 percent of feed for animals across the country before the war, says Osama Hammoud, who runs the livestock department at the agriculture ministry.

Now it is a hideout for IS jihadists who use it as a launching pad for their attacks, even after the collapse of their “caliphate” in 2019.

Russian and Syrian warplanes have routinely targeted IS positions in the area, but failed to stamp them out.

The Badia is also littered with landmines and other explosive remnants, which have killed and maimed hundreds across Syria in recent years.

In the rural area of Al-Hayjana outside Damascus, Saasaani tended to a newborn lamb, while also keeping an eye on the rest of his flock under the scorching spring sun.

Herding runs in his family. Saasaani’s father used to take him along to the Badia, hundreds of sheep in tow.

They would often reach the gates of the ancient city of Palmyra in central Syria, over 200 kilometres (130 miles) northeast of Damascus, but the war “has limited the areas we can access,” he said.