Firdous reprimands AC Sialkot, shouts her down over substandard items in Ramadan Bazaars 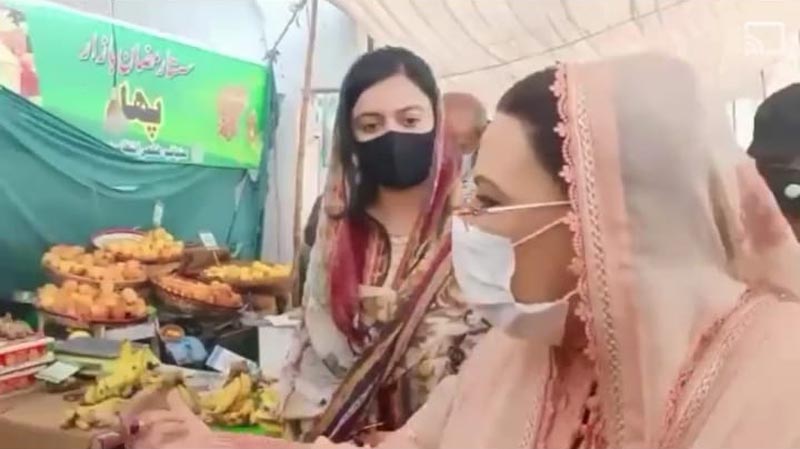 During her visit to the Ramdan bazaars, Dr Awan scolded and shouted at the Assistant Commissioner Sonia Sadaf in presence of the public and other officials. Firdous Ashiq Awan took stern notice of the sale of substandard goods and told AC Sialkot that it was her duty to check the quality of the goods.

During her visit, she said that Ramadan bazaars have been set up by the government, it cannot be given in the hands of such thugs adding that the government is responsible here.

When the Assistant Commissioner Sialkot tried to explain her position the special assistant chided her and apprised that she is getting paid for the work and it is her duty to keep a check on the things here.

Dr Firdous Awan said that the government is suffering from bureaucratic machinations. If you are an assistant commissioner, you should face the public instead of hiding. To which, when the AC explained that she is facing difficulties owing to lack of space since people have thronged the bazaars. However, shouting her down, Dr Awan said the “rush is for everyone” and chided that “have you descended from paradise”.

Despite repeated calls by AC, requesting Dr Awan to talk in a calm manner, Dr Ashiq continued to scold her, following which the AC Sonia Sadaf angrily left the venue.

However, later reacting to the incident, AC Sonia Sadaf claimed that she along with her administration has been present at Ramdan bazaars round the clock, but regretted that such behavior shown by Dr Firdous Awan is not the way.

Meanwhile, Chief Secretary Punjab Jawad Rafique, reacting to the Sialkot incident, condemned the uncivilized treatment with the officer in charge at Ramdan Bazaar, and said “treating any government officer and official with such indecency is condemnable, and it is unbecoming of anybody to humiliate a government officer.”

He said officers around Punjab are serving the people round the clock, under harsh weather and Covid-19, which is worth appreciating. The chief secretary,however, said he has taken the notice of this sad incident, and has sent his reservations to the CM Punjab.