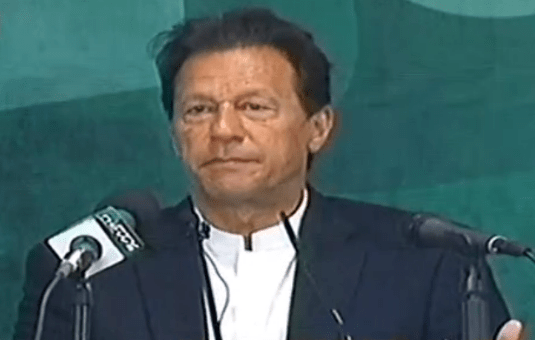 MULTAN: Prime Minister Imran Khan on Monday terming uplift of farmers vital for prosperity said the agriculture sector would be revamped on modern lines to benefit both growers and the country.

Addressing here at the distribution ceremony of first phase of Kisan Cards to provide agriculture loans for farmers, the prime minister said the step would help eradicate poverty of around five million farmers across the country.

“Giving strength to farmers mean making the country strong,” he said, adding that the government was firm to bring a positive transformation in the lives of farmers.

The prime minister said he had decided to personally oversee the agriculture sector and would be getting updates on related projects every week.

“Time will tell that the reforms of agriculture sector will bring a revolution of economic prosperity,” he said.

He said the technology-based Kisan Card would end discrepancy and corruption in dispensation of loans to farmers.

He announced to increase subsidy on DAP (diammonium phosphate) from Rs 500 to Rs 1,000 under Kisan Card.

The prime minister said with his efforts, the agriculture sector was included in the umbrella of China Pakistan Economic Corridor (CPEC) and added that Pakistan’s could benefit from the Chinese high-yield and seed development technology.

He said farmers in the country were still using old techniques of agriculture, which needed a major transformation.

He said extension services would be handed over to private sector, where a trained professional on motorbike per Union Council would visit farmers to apprise them of modern agriculture modes.

He said the government was focusing on implementation of Rs 300 billion agriculture transformation package, adding that to overcome water shortage, two big dams and several small reservoirs were under construction besides the lining of canals being carried out with Rs 220 billion.

On livestock, he said Rs 40 billion had been allocated for projects including import of semen to improve cattle breed and increase of milk production. With export of cheese and milk, Pakistan can earn up to $25 billion, he added.

He said loss of perishable fruit and vegetables would be overcome by establishing storage houses and food processing plants.

Imran Khan said the government was pursuing the target to double the cereal production  including wheat, corn and barley and take steps to cut the imports.

He said Kisan card will help farmers get loans to buy seeds, fertilizers, other equipment besides getting insurance of crops.

He said Rs 17 billion initial subsidy was being provided for agriculture incentives including the Kisan card, adding that Agriculture Emergency Programme was in progress to set up new markets and increase wheat produce.

Under the Agriculture policy already launched by the Punjab government, he said, 8,000 land record centres were being established in the province including 3,000 in South Punjab.