26 women cricketers to undergo skills and fitness training in Karachi 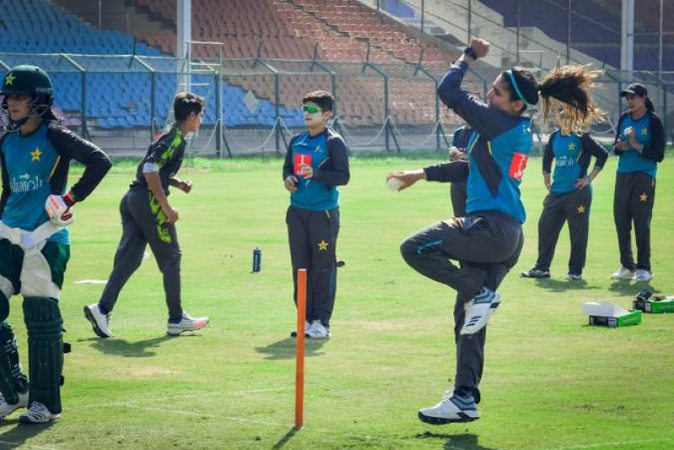 KARACHI: Twenty-six women cricketers will undergo skills and fitness training at the DHA Sports Club Moin Khan Academy in Karachi during the National Women High Performance Camp. Head coach David Hemp who is currently conducting a camp for the emerging women players at the same venue will take charge of this camp once it formally commences on Saturday (April 24) following a seven-day quarantine period for the players in a Karachi hotel between April 17-23. In accordance with the PCB’s Covid-19 protocols, all those involved in the camp will undergo two tests before their integration in the bio-secure environment.

Their first test will be held at their residence before their departure for the camp and those who return negative tests will undergo second testing on 17 April upon their arrival in Karachi. A third test will be conducted at the end of the seven day quarantine. The camp will be held under strict bio-secure environment, the players and support staff will be stationed at a local hotel. Over the course of the 15-day camp which will conclude on Saturday (May 8), the players will train under the supervision of the coaching staff of the women’s national cricket team. Hemp, Arshad Khan, bowling coach, Drikus Saaiman, strength and condition coach and Kamran Hussain, assistant coach, will work with the players. The camp schedule has been prepared by Hemp and Saaiman in order to provide the participating players the opportunity to improve their overall fitness, enhance cricketing skills and to prepare them for future domestic and international events.

Besides fitness sessions and net practice, the players will also play scenario-based 50-over, T20 and T10 intra-squad matches during the camp.

Chief selector Urooj Mumtaz said: “The camp has been devised to keep the players fit and ready for upcoming international assignments. It also provides an excellent opportunity for our national players to further improve their skills in line with modern day cricket which will make them more competitive in major international tournaments. We are currently in the process of finalizing our international tours program for the next 12 months and it promises to be an exciting year of competitive cricket. The ongoing emerging camp in Karachi has been instrumental in identifying talented players with good potential, as we look towards improving our bench strength and building for the future. The camp focuses on a holistic athlete development approach as we aim to nurture and develop these youngsters. The players have been provided a safe and secure environment and we have tried to make them as comfortable as possible in these challenging Covid-19 circumstances. We are very optimistic that both emerging and national players will utilize the two camps to the fullest in the presence and supervision of a hardworking and fully dedicated coaching team led by David Hemp.” Meanwhile, Bismah Maroof who had declared herself unavailable for the tours to South Africa and Zimbabwe at the start of the year, will not be taking part in the camp as she is taking an indefinite break from the game.