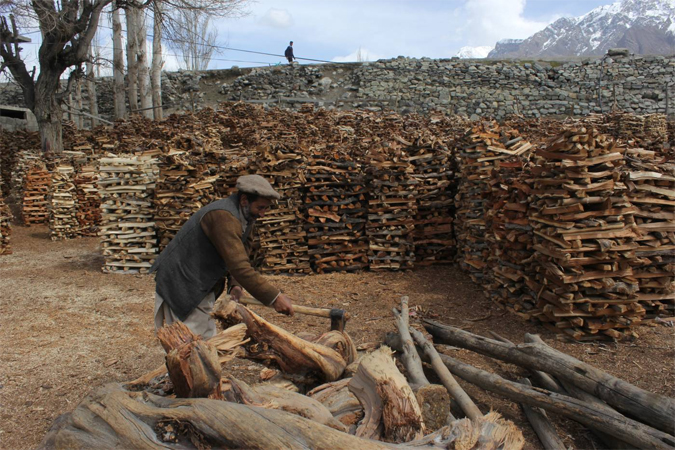 In a fresh bid to halt illegal logging in the scenic northern region of Gilgit-Baltistan, Pakistan has brought in a paramilitary force to stop organised groups from cutting down trees and transporting them to other parts of the country.

The Frontier Constabulary (FC), a civil armed force working under the federal government and led by police officers, was deployed in January to support the regional forest department, which officials say lacks staff, training and funding.

While forests around the world have seen encroachment spike during the pandemic as lockdown measures leave them unguarded, illicit logging in Gilgit-Baltistan has all but stopped since the FC arrived, said chief conservator Zakir Hussain.

Incidents of tree cutting and transport have dropped in both government and community-owned forests, where logging bans are harder to enforce, said Hussain, whose Forests, Parks and Wildlife Department oversees the law enforcement agency.

“The locals have regard for the force,” he said, adding that its deployment had acted as a deterrent to deforestation and raised morale among forestry staff.

“There is no organised pilfering of wood now and the amount being transported outside of the forest is at nearly zero,” he said.

For the next three years, four platoons with 36 members each will be stationed at checkpoints on exit routes from the forest to stop the movement of illegal timber, explained Malik Amin Aslam, the prime minister’s special assistant on climate change.

The FC also patrols regularly and has the power to apprehend people caught cutting down or transporting trees, he added.

Demand for wood in Pakistan, a nation of about 220 million people, is three times higher than its potential sustainable supply, according to the most recent National Forest Policy published in 2015.

The country loses an estimated 27,000 hectares (66,700 acres) of trees per year, mainly in private and community-owned natural forests, the policy noted.

“The forest owners and local communities depend on forests as their sole source of livelihood. As a result, forests in all provinces, particularly in Gilgit-Baltistan and Khyber Pakhtunkhwa, are under severe pressure,” it said.

A study by a group of Chinese and Pakistani researchers published last year points to a host of factors behind forest losses in Gilgit-Baltistan, including population growth, unchecked cattle grazing, poor forest management and the use of wood as fuel.

Deforestation has led to soil erosion, rising air pollution and higher temperatures in the region, while also degrading some of Pakistan’s prime tourist areas, the study warned.

Hussain said the two main groups responsible for illegal logging in the region are local communities, who mainly cut down trees to use as firewood for cooking and heating, and a powerful “timber mafia” that sells illegally cut wood to timber merchants in other parts of Pakistan.

Efforts to tackle the problem are complicated by geography and lack of infrastructure, he explained.

The region consists of hundreds of valleys with no paved roads connecting them, and many areas have no internet or phone networks, he said.

On top of those problems, Hussain said, Gilgit-Baltistan’s forestry department does not have enough manpower to oversee the quarter-million hectares of natural forest in the region.

Under the region’s Forest Act of 2019, the department was granted the power to arrest, investigate and prosecute anyone caught illegally logging, but that move has yet to be approved by the cabinet, Hussain said.

Even so, its staff of about 1,000 would need to triple in size to properly protect the region’s forests and wildlife, he added.

“We are under-staffed and lack both in training and equipment, as well as logistics,” he said.

“Our unarmed staff were helpless to stop the illegal timber mafia and local communities before the deployment of the FC.”

Muhammad Tahir, a teacher living in Gilgit-Baltistan’s Diamer district, said that since the Frontier Constabulary arrived in the area forest department employees have stepped up their efforts to tackle illegal logging.

But while the paramilitary force can help stop people from transporting wood out of the forests, local cutters have little option but to fell wood as their main source of fuel, he said.

Tahir said he would like to see the government provide solar energy, natural gas and liquefied petroleum gas to people living in the area and give them incentives to shift to these fuels.

“As long as the government does not provide alternate fuels to locals at cheap rates, this illegal cutting cannot be stopped,” he said.

Syed Kamran Hussain, regional manager for green group WWF-Pakistan, said the deployment of the FC is an effective way to supplement the work of the Gilgit-Baltistan forestry department until it gets more trained staff.

But because about 70% of forested land in the region is owned by local people, no tree protection initiative will succeed unless the government gains the buy-in of forest communities, he added.