* 'I've always subscribed to the if you dish it out, you've got to take it philosophy,' Piers, who works as DailyMail.com's Editor-at-Large, wrote in a Mail on Sunday column on Sunday 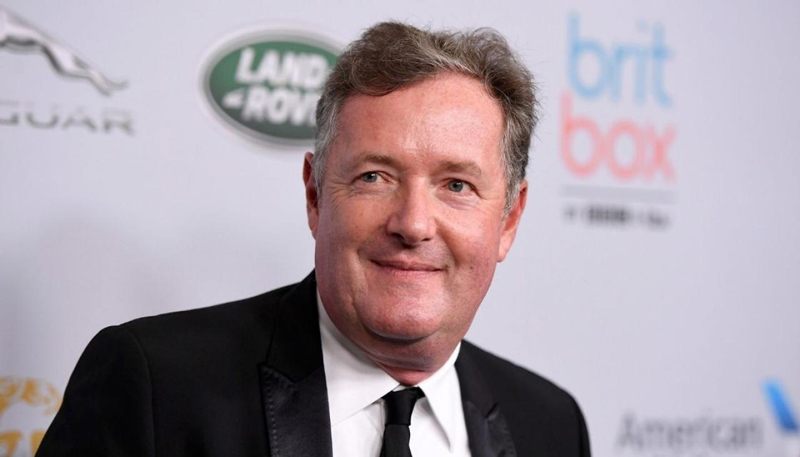 Piers Morgan says his sons were harassed online and even received threats of violence from Twitter trolls amid his comments about Meghan Markle, who he criticised most recently following her and Prince Harry’s interview with Oprah Winfrey.

Piers, a longtime critic of the couple and supporter of Queen Elizabeth II, recently left his job as co-host of Good Morning Britain following a backlash over his recent remarks about the Duchess of Sussex, who made shocking accusations against the monarchy in the CBS tell-all special that aired last month.

“I’ve always subscribed to the ‘if you dish it out, you’ve got to take it’ philosophy,'” Piers, who works as DailyMail.com’s Editor-at-Large, wrote in a Mail on Sunday column on Sunday, March 28. “But my three sons told me they too are all being targeted, and sent me screenshots of venomous abuse and threats of violence towards them, which made my stomach churn, especially as police are already investigating a death threat made to me and my eldest boy Spencer last month.”

Piers, who has three adult sons and a nine-year-old daughter, continued, “None of them even care about Meghan Markle, let alone agree with my views on her. Yet the Twitter troll mob has found them guilty by association. One troll vowed to murder me in front of them, and added: ‘When your dad dies, the world will have a party.'”

On the CBS special with Oprah, Meghan revealed she felt suicidal while living as a royal and claimed the monarchy rejected her pleas for mental health treatment. She also said someone in the royal household raised “concerns” about the colour of their then-unborn first baby’s skin. Piers later said on ITV’s Good Morning Britain, “I’m sorry, I don’t believe a word she says, Meghan Markle.”

Piers, who has three adult sons and a nine-year-old daughter, continued, ‘None of them even care about Meghan Markle, let alone agree with my views on her. Yet the Twitter troll mob has found them guilty by association’

Following an on-air debate, he walked off the set, then returned and said, “It’s not for me to question if she felt suicidal, I am not in her mind and that is for her to say. My real concern was a disbelief, frankly…that she went to a senior member of the royal household and told them she was suicidal and was told she could not have any help because it would be a bad look for the family.” A day later, following tens of thousands of complaints, including from Meghan herself, ITV announced Piers was leaving Good Morning Britain.

Meanwhile, supporters of the duchess have continued to accuse Piers and other vocal critics of racism, which he has denied.

“I was trending…with people saying I was ‘racist’ and ‘mocking mental illness’ by disbelieving Meghan’s claims, and demanding I be fired,” he wrote in his column. “It didn’t matter that I’ve never said anything racist about her or that my only comments about her race have been to repeatedly say how great it was that a bi-racial woman married into the Royal Family. No, it appears that questioning Meghan’s fork-tongued ‘truth’ is now a racist hate crime.”

On Good Morning Britain, he and co-host Alex Beresford debated about Meghan and Harry’s interview before the latter brought up Piers’ personal past correspondence with Meghan-he has claimed she ghosted him before she met Harry, prompting him to storm off the set. The duchess told Oprah, “In those months when I was pregnant, all around this same time-so we have in tandem the conversation of ‘He won’t be given security, he’s not going to be given a title’ and also concerns and conversations about how dark his skin might be when he’s born.”

On Good Morning Britain, Piers told Alex that the duchess’ on-air comments spurred people to look “upon the palace, the monarchy, the queen, everyone in the royal family, as a bunch of racists.”

“Is there a difference if it was said, perhaps in all innocence, and they just said, ‘What colour baby might you have?’ without any suggestion of it being a concern or a worry if it had darker skin?” Piers questioned. “Would that in itself, would just the question be racist?”

Piers wrote in his column that Alex “insisted that even if Meghan’s claim about Archie being barred from Princehood because of his skin colour is untrue, it’s still her ‘lived experience’ so should be respected.”

“But that’s ridiculous; you can’t have a ‘lived experience’ of racism when the fact you’re basing it on is false,” Piers continued. “Or rather, you can, but it’s not a real one and nobody should be compelled to believe it. Sadly, this is where we’ve now arrived in society: the truth can be whatever someone decides it is, so Meghan Markle must be believed because it’s ‘her truth.’ And if you don’t believe her, you’re a racist.”

Piers’ longtime friend and former America’s Got Talent co-judge Sharon Osbourne recently departed her role of co-host on The Talk following a heated on-air debate of his recent criticism of Meghan, during which she defended him and said he was not racist. Her exit from the show also came amid recent claims that she made racist and homophobic comments against her past co-hosts. Sharon claims she was “blindsided” by CBS with the Piers questions and her rep called the accusations of her remarks about her co-stars “lies.”

“Sharon Osbourne’s quit The Talk, driven out for the crime of defending me, a friend she knows isn’t racist, from a co-worker saying I’m racist simply because I disbelieve Meghan Markle,” Piers wrote in his column. “It’s outrageous, but what’s happened to Sharon and me in the past fortnight isn’t really about Ms Markle. She’s just one of many whiny, privileged, hypocritical celebrities who now cynically exploit victimhood to suppress free speech, value their own version of the truth above the actual truth, and seek to cancel anyone that deviates from their woke world view or who dares to challenge the veracity of their inflammatory statements.”

He added, “No, it’s about a far bigger issue than one delusional Duchess, and that’s everyone’s right to be free to express our honestly held opinions, forcefully and passionately if we feel like it.”