Pakistan was not created to make Nawaz, Zardari rich 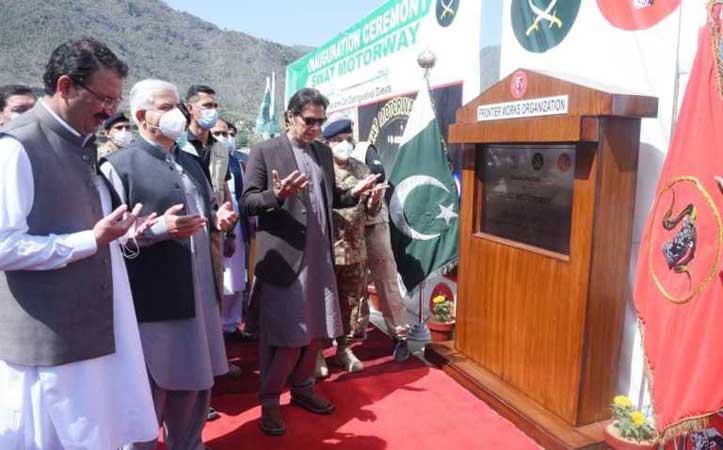 Prime Minister Imran Khan on Friday once again slammed the opposition for their alleged loot and plunder of the national wealth, saying Pakistan was not created to make PML-N leader Nawaz Sharif and PPP Co-chairman Asif Zardari rich.

Addressing the inaugural ceremony of a newly established block at the University of Malakand in Khyber Pakhtunkhwa, the prime minister said that over the last 30 years, corrupt leaders continued to steal money from the national kitty. “The thieves themselves don’t know how much they have stolen from the country,” he said, adding that it is the stolen wealth that has compelled their sons and daughters to lie to the public. “What’s the use of amassing wealth [through unfair means] when you have to either end up in the hospital or in jails,” he said.

Imran Khan said that the PML-N repaid Rs 20,000 billion worth of loans, together with interest, in two-and-a-half years, while the PTI government repaid loans worth Rs 35,000 billion, with interest, within the same timeframe. “Our friends helped us out, so we saved the country from becoming a defaulter,” he said, adding that when so much money goes into repayment of loans, nothing is left in the national exchequer to invest in education, hospitals or construction of roads.

The prime minister said the country’s wealth has been stolen for the past 30 years and its plunderers had either taken shelter in hospitals or fled away abroad to escape accountability. Happiness, he remarked, could only be achieved by following the right path and serving people with dedication and commitment. He said there is no shortcut in life for achieving goals and all objectives could be achieved through hard work and professionalism, adding that an aimless life destroys potential of individuals.

Imran Khan said Pakistan possessed all the potential to become a developed country and great responsibility lies on the educational institutions by bringing intellectual revolution among students as per Quaid-e-Azam and Allama Iqbal’s vision. He said the government is focusing on mega development projects to generate economic and financial resources. In addition to two mega projects of Bhasha and Mohmand dams to meet energy needs, Ravi and Business Cities are also being established in Lahore with potential to generate Rs 6000 billion revenue and promote economic activities, he said. The priority, he said, is being given to the construction industry keeping in view its enormous potential to generate employment opportunities, besides providing low-cost housing to poor, labourers, farmers and have-nots. Thirty industries will be directly benefited from the promotion of construction industry in Pakistan, he added.

Imran Khan said promotion of tourism in the country is the cornerstone of PTI government’s policy and the domestic tourism had now taken off, especially in the KP. He said Malaysia is earning about $20 billion, Turkey $40 billion, Switzerland from $60 billion to $80 billion from tourism and Pakistan’s northern areas including Gilgit Baltistan and KP have more land than Switzerland where skiing sports could be developed to generate substantial revenue for the national kitty. Malaysia, he said, has achieved remarkable success by promoting cottage and others industries due to the prudent leadership of Dr Mahathir Mohammad.

The prime minister said developed nations’ success is attributed to the priorities they accord to quality education, research and knowledge-based economy, adding that his government is investing on human resource development for rapid economic growth and generate more employment opportunities. He said the government is working for the promotion of technical education and information technology to ensure sustainable economic growth which would ultimately help generate more jobs and empower country’s youth.

The prime minister told the audience that the current pace of global technological advancement was unprecedented. “We have to fully participate in that [technological revolution] as we have been left behind,” he said, lamenting that Pakistan had committed a great mistake in not paying emphasis on technology, technical and higher education. “The more we add value to our people and spend on them, [the more] they will add value in society. A knowledge [based] economy is the economy that goes up in the world.”

Imran Khan lamented that the country’s agriculture sector is still using outdated and inefficient methods. “We are going to bring in a new agriculture policy next week that will alone lift the country,” he revealed. “We are giving incentives to the construction industry and construction is happening at an unprecedented level in Pakistan’s history […] and [we are] making low cost housing and affordable housing for the people,” he added.