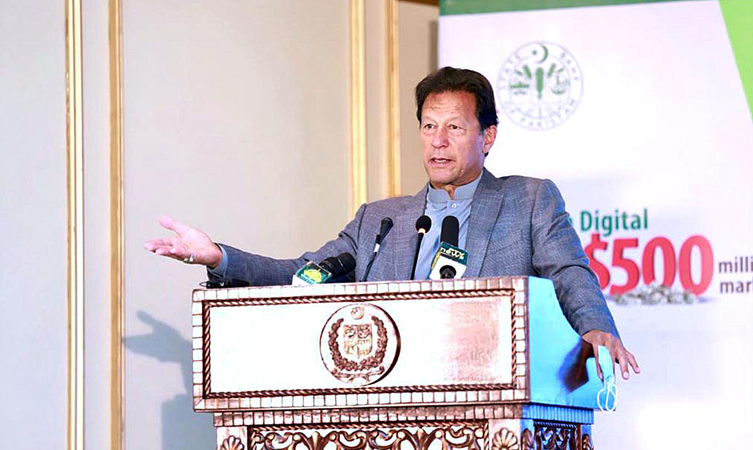 Prime Minister Imran Khan has said the country’s economic indicators are on a positive trajectory despite many challenges including that of the Covid-19.

The Prime Minister was addressing a ceremony on Thursday in connection with Roshan Digital Account crossing $500 million mark in remittances.

Imran Khan said the present government has made record repayments of $20 billion in foreign loans over the last two and a half years. The Prime Minister expressed his pleasure over the record increase in the country’s exports at a time when the economies around the world were badly affected by the breakout of the pandemic. He said, “Our exports have increased more than our competitors including India and Bangladesh. He said the country’s textile sector is witnessing a boom and new textile mills are being opened.”

Imran Khan noted that the conscious efforts to improve exports as well as remittances including those in Roshan Digital Pakistan Account have helped stabilise rupee. The Prime Minister said that eighty eight thousand Roshan Digital Accounts have been opened in ninety seven countries. He pointed out that the overseas Pakistanis are the biggest asset and it has been his endeavour to tap this potential to take forward the country.

“I have been saying for the past 20 years to tap this enormous potential,” he said. “and there is still a lot of room for encouraging those abroad to avail the service”.

The Premier directed the governor of State Bank to brainstorm more ideas to engage overseas Pakistanis. “There is a need for focused advertising to increase the number of Roshan Digital Accounts.” “The further we elevate from the achieved milestone of 88,000 accounts, the better,” he maintained.

The PM on the occasion also directed the banks to pay special attention to making the Naya Pakistan Housing Scheme a success. “We also need to work on the uplift of the small and medium industries so we can address the concerns of the Pakistanis at the grassroots level.”

“Today, the elite have every facility but the masses have been suffering for such a long time,” he said, and added, “no government paid attention to uplifting their status.”

He also stressed for a focussed and innovative media campaign for overseas Pakistanis to apprise them about this new initiative. He was confident that this will help increase the number of accounts.

The Prime Minister said the banking sector has an important role in the Naya Pakistan Housing Program as well as the promotion of small and medium enterprises. He said these two sectors have the potential to accelerate the economic growth.