Bangladesh cricketers Nafees and Razzak announce retirements, will take up posts with Board 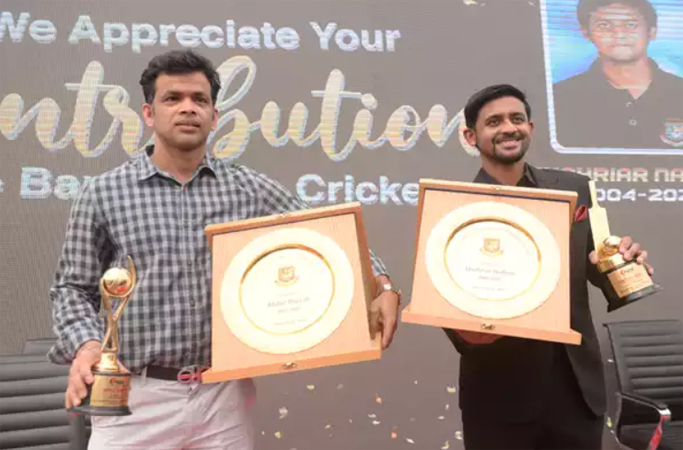 DHAKA: Shahriar Nafees and Abdur Razzak have announced their retirements from all forms of cricket, making public their decisions after being employed by the Bangladesh Cricket Board. Razzak, the 38-year-old former left-arm spinner, has been appointed as a senior selector alongside chief selector Minhajul Abedin and Habibul Bashar, while 35-year-old Nafees, a top-order batsman, has taken up a position in the board’s cricket operations department. A reception was organised to honour the two cricketers at the Shere Bangla National Stadium on Saturday, during the lunch interval on the third day of the Dhaka Test against West Indies, where they were presented with crests by the BCB and the players’ association. Razzak was the first Bangladesh player to pick up 200 ODI wickets, and also holds the record (joint with Mohammad Ashraful) for the fastest half-century by a Bangladeshi in ODIs – off 21 balls. Among players from his country, Razzak also has the second-most ODI five-wicket hauls and the most wickets in a bilateral ODI series.

Over the years, Razzah has been a domestic giant, with 137 first-class appearances. He has taken 634 wickets in those games, including 41 five-fors. He is also the first Bangladeshi bowler to bag 600 first-class wickets and has won nine domestic first-class titles with Khulna Division and South Zone. After a four-year hiatus, Razzak made an international comeback at the age of 35 when he played the Dhaka Test against Sri Lanka in 2018, which turned out to be his last international outing. Nafees will always be best remembered for his 138 against an Australian Test attack that had Brett Lee, Stuart Clark, Jason Gillespie, Shane Warne and Stuart MacGill. The sight of a strokeful left-handed opener taking on some of the best bowlers the world, who had just conquered South Africa, was a breath of fresh air for Bangladesh. Nafees’ dominance of Warne, in particular, where he hit the legspinner for ten fours in a couple of sessions, remains an iconic image in Bangladesh cricket.

Nafees had a strong 2006 thereafter, finishing with 1000-plus ODI runs, including three centuries. Later in the year, he became Bangladesh’s first T20I captain, but that remained his only appearance in the then-new format. After a low-scoring 2007 World Cup, Nafees lost his place in the team and in mid-2008, he joined the now-defunct Indian Cricket League. The BCB banned the Bangladeshi players for ten years for taking part in the tournament, but they were relieved less than a year later, and returned to the fold. Nafees would return to the Bangladesh team during a Test against India in early 2010, and went on to play 23 more times for his country, including at the 2011 World Cup, before his last international outing against Zimbabwe in 2013. Nafees finished the 2019-20 first-class season with a century and two fifties, having been one of the top run-getters in the seven seasons following his last Test match. During the 2015-16 season, he crossed 1000 runs for the first time in first-class cricket, with three centuries and a 62.05 average. He is also Bangladesh’s first batsman to hit a T20 century, when he made an unbeaten 102 for Khulna Royal Bengals in the 2013 Bangladesh Premier League.