* Following the news, many celebrities expressed their heartache over the legendary host's passing, including Andy Cohen, Craig Ferguson, Viola Davis and several others 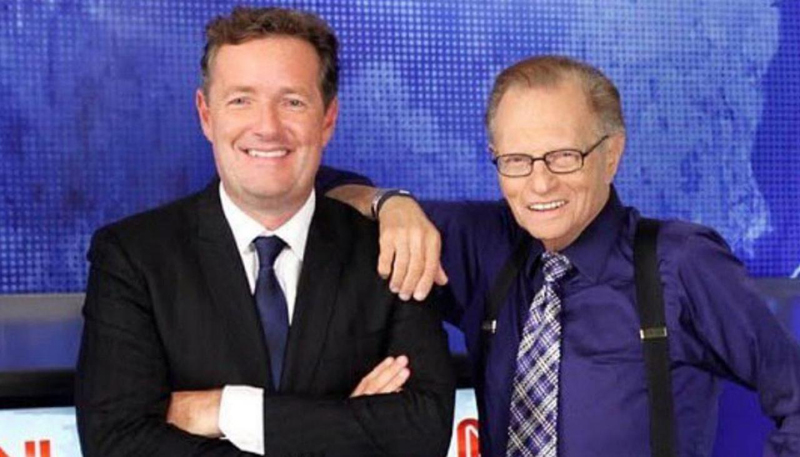 The world is mourning the loss of radio and television icon Larry King. Taking to social media, the star’s production company confirmed the heart-breaking news of his death on Saturday, Jan. 23. “With profound sadness,” a message read on Twitter, “Ora Media announces the death of our co-founder, host, and friend Larry King, who passed away this morning at age 87 at Cedars-Sinai in Los Angeles.”

Following the news, many celebrities expressed their heartache over the legendary host’s passing, including Andy Cohen, Craig Ferguson, Viola Davis and several others.

However, there was one homage that didn’t sit right with people and that was Piers Morgan’s tribute. “RIP Larry King, 87,” the English broadcaster first tweeted. “A television legend.”

However, there was one homage that didn’t sit right with people and that was Piers Morgan’s tribute. ‘RIP Larry King, 87,’ the English broadcaster first Tweeted

Shortly after, he added, “Larry King was a hero of mine until we fell out after I replaced him at CNN & he said my show was ‘like watching your mother-in-law go over a cliff in your new Bentley.’ But he was a brilliant broadcaster & masterful TV interviewer.” It didn’t take long for Twitter users to call out the 55-year-old journalist over his tribute.

“For god [sic] sake,” one user commented, “All you had to say was RIP Larry King. A true hero of mine. The rest was so unnecessary.” Another user echoed the same sentiments, replying, “What’s the point of this tweet? Couldn’t you simply say that he was a brilliant broadcaster and masterful TV interviewer and it was a privilege to follow him on CNN? Would that have been so difficult?” “Imagine making someone else’s death about yourself,” someone else shared.

While many called out Piers online, there were a few who praised his characteristically harsh candour.

One person responded, “This is honest and you still found a way to keep it respectful. I appreciate it. Hate phony stuff,” to which the British star replied, “Me too. Larry hated me replacing him at CNN and never made any secret of it, which I found very sad because he was one of my heroes – but I still think he was a superb broadcaster & one of the all-time TV greats.” Piers added, “Of course.. Larry loved that mother-in-law joke, and he would have found the hysterical reaction to my tribute ridiculous.”

At this time, it appears the Good Morning Britain host is standing by his words despite the backlash. As he put it, “My theory is the pandemic’s sent everyone nuts & if it helps them to scream irrational abuse at me, then I’m OK with that.” Fans might recall that Piers replaced Larry on CNN’s Larry King Live back in January 2011 and the show became Piers Morgan Tonight. Following the move, the two weren’t shy about discussing their tension.

News of Larry’s passing comes almost three weeks after he was hospitalized with coronavirus. It was reported that he had been battling COVID-19 for at least 10 days.

The 87-year-old star was discharged from the ICU on Jan. 3, with his family telling E! News, “Larry continues to improve. He and his sons thank everyone for the outpouring of support and can’t wait to get him home. They also thank the medical workers and staff at Cedars-Sinai and hospitals elsewhere who are providing care to so many people under extraordinary circumstances.”

A source previously told CNN that Larry’s children Cannon, Larry Jr. and Chance, as well as his estranged wife Shawn, who he filed for divorce from in 2019, were unable to visit him in the hospital due to restrictions to help stop the spread of the virus. Moreover, NBC News reported one of Larry’s sons, who wasn’t identified, also tested positive for the virus.

At this time, Larry’s production company stated that funeral arrangements and a memorial service will be announced at a later time.