* What's more, visitors will be able to zoom all the way back down along an epic tube slide 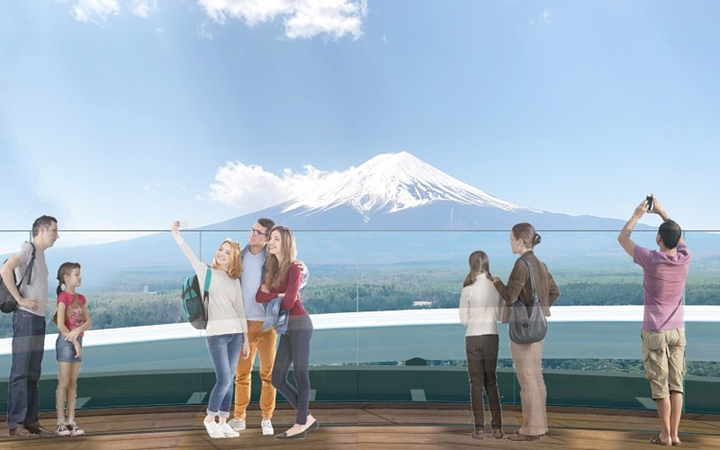 One of the best views of Mount Fuji is from the Fujiyama roller coaster at the Fuji-Q Highland theme park. But soon non-riders will be able to drink in the same incredible views of Japan’s most famous volcano, thanks to a new $10million 180ft-high observation deck being built in the middle of one of the coaster’s summits.

What’s more, visitors will be able to zoom all the way back down along an epic tube slide.

The platform is being built to mark the roller coasters 25th anniversary and is due to open this summer. Visitors will reach it via an internal lift inside a new tower called the Fujiyama Tower.

It was originally planned that the tower would only be used by theme park staff in order to carry out inspections and maintenance on the roller coaster.

The platform is being built to mark the rollercoaster’s 25th anniversary and is due to open this summer. Visitors will reach it via an internal lift inside a new tower called the Fujiyama Tower

However, as staff saw the ‘superb view’ that would be offered from the top, it was decided to open it up to the public.

The theme park says: ‘This tower is the only tower where you can see the lush sea of trees below the magnificent Mount Fuji and the endless blue sky. ‘Whether you’re visiting Mount Fuji for a photo, or were riding Fujiyama but were screaming so couldn’t see the mountain slowly, climbing up here will give you a spectacular view.’

As well as the observation deck and the slide, an open-air ‘windswept’ track that was previously used by maintenance staff, and does not have any handrails, will also open for visitors – but for this experience they’ll need to strap into a harness.

When the roller coaster opened in 1996, it was one of the tallest in the world with a top height of 259ft. At the time it boasted the largest drop in the world at 230ft.

In July, two executives from the theme park filmed themselves riding the roller coaster in silence to demonstrate the new ‘no screaming’ rule to stop the spread of coronavirus.

It came after a group of Japanese park operators released joint guidelines on how to operate safely under the threat of the virus. Among the recommendations was that thrill seekers should wear masks at all times and ‘refrain from vocalising loudly’ on roller coasters and other rides.