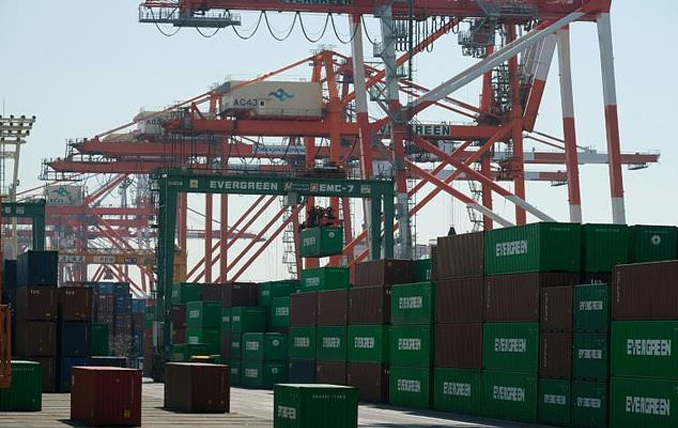 China’s trade surplus with the United States widened last year, underlining the failure of Donald Trump to narrow the gap during his tenure, while demand soared for electronics and medical equipment during the coronavirus pandemic.

The pick-up came on the back of a jump in exports through most of last year as China’s factories kicked back into gear from the second quarter following a strict lockdown that managed to broadly contain Covid-19 and allow economic activity to return.

Trump had made addressing the gaping trade gap with China a priority when he took office four years ago, and signed a partial agreement with Beijing to boost the country’s purchases of goods such as soybeans.

The figure is a 14.9 percent jump from 2017’s surplus of $275.8 billion — which was already a sensitive political issue due to Trump’s claims that China held unfair practices and killed US jobs.

While the world’s second-largest economy suffered a record contraction in the first quarter of last year as the coronavirus essentially brought all activity to a halt, it soon recovered as lockdowns around the country were eased and people went back to work.

In December, however, both exports and imports rose more than expected, at 18.1 percent and 6.5 percent respectively.

“With the pandemic under control in China, factories and export-oriented companies have resumed normal operations earlier than most other countries, allowing China to meet global demand better,” said Axi strategist Stephen Innes.

The country posted a trade surplus for last month of $78 billion, which analysts said was “at or near record levels”.

Li said outbound shipments of electronics rose, with increases seen in notebook computers and household appliances, as well as medical instruments and equipment.

China exported 224.2 billion masks from March to December, Li added, nearly 40 masks for every person outside of China.

Iris Pang, ING chief economist for Greater China, told AFP that China’s exports likely did well as “other exporters for most of the year had been in difficult positions because of Covid-19”, shifting more orders to China.

On the US-China surplus, she said coronavirus restrictions in the US would also have hit export capacity.

“The other thing is, during Covid-19, some commodity prices went down and affected the value of what China imported,” she said, adding that Beijing will likely continue to fulfil its terms of the trade deal with the US, barring added demands from Washington.

Lu Ting, chief China economist for Nomura, noted that China’s imports from the US jumped 45 percent on-year in December, “pointing to Beijing´s continued effort to fulfill its commitments on the phase-one trade deal”.

US-China relations have deteriorated to their worst in decades under the Trump administration, largely because of the trade war that saw Washington hit Chinese imports with huge tariffs — drawing retaliation and tit-for-tat moves.

But overall, Lu said he expects export growth to “remain elevated” for the first half of 2021, partly because of another wave of Covid-19 infections bolstering demand for protective equipment and work-from-home products around the world.

In an interview with The Wall Street Journal this week, US Trade Representative Robert Lighthizer defended the Trump administration’s tactics of imposing tariffs on hundreds of billions of dollars in Chinese goods, saying the president had “changed the way people think about China”.