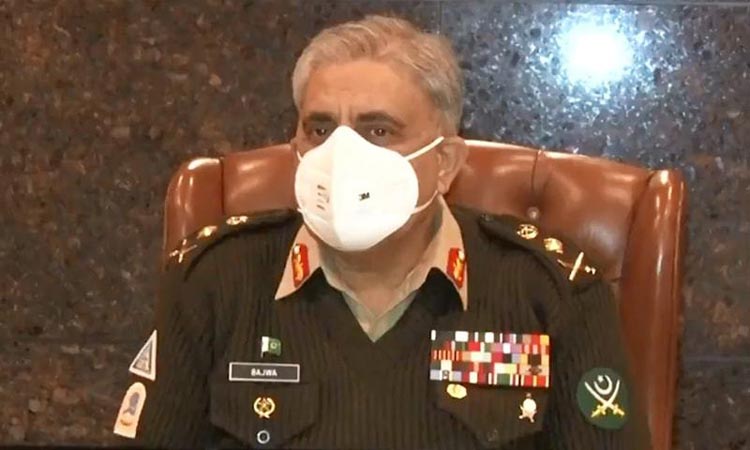 The Pakistan Army leadership in a meeting at the General Headquarters in Rawalpindi on Tuesday vowed that terrorists and their abettors would be “defeated at all costs”, the Inter-Services Public Relations (ISPR) said in a statement.

At the 238th Corps Commanders’ Conference, chaired by Chief of Army Staff (COAS) Gen Qamar Javed Bajwa, the army leadership reviewed the security situation in the country and the region with a “special focus on the situation along the borders, internal security and other professional matters of the army”.

It also discussed the “on-going security situation along the Line of Control, Working Boundary and eastern border”, the ISPR said.

The army huddle paid “special tribute to all shuhada (martyrs) and their families” for their sacrifices for a “peaceful and secure Pakistan”, especially the martyrs in the recent incidents in Balochistan.

“Their sacrifices won’t go waste. Terrorists and their abettors will be defeated at all costs,” the statement added.

Earlier this week, 11 coalminers belonging to the Shia Hazara community were shot dead in the Mach area of Balochistan after armed militants kidnapped them and took them to a nearby area before opening fire at close range. The militant Islamic State group, commonly known as Daesh, claimed responsibility for the killing.

It was the second such incident in the span of a few months in the restive province that has seen an uptick in violence, with several incidents of terrorism being reported last year.

In October 2020, seven soldiers of Frontier Corps (FC) Balochistan and seven security guards were martyred in an ‘encounter’ with a “large number of terrorists” while escorting a convoy of state-run Oil and Gas Development Company Ltd (OGDCL) on the Makran Coastal Highway in Ormara.

The meeting noted that training and professional pursuits must remain the army’s “prime focus to enhance operational preparedness and thwart any possible misadventure”.

“Highest standards of capability and maintaining cutting edge at all levels is vital to meet all challenges in tandem with other elements of national power,” the statement quoted Gen Bajwa as saying.

“[The] defeat of complete threat spectrum is only possible through a comprehensive national effort, where all segments of the society play their rightful role,” the statement quoted the participants as observing.

In accordance with the Right to Self-determination of Kashmiris Day, the forum expressed “complete solidarity with resilient and brave Kashmiri brethren till the realisation of their just cause in accordance with their aspirations and relevant United Nations Security Council resolutions”.

“Decades of atrocities by Indian occupation forces have failed to suppress ever-strengthening freedom struggle. [The] determined Kashmiris shall succeed,” the army leadership said.

According to the ISPR, the meeting also expressed its satisfaction over the progress in the Afghan peace process and efforts made for regional peace and stability.