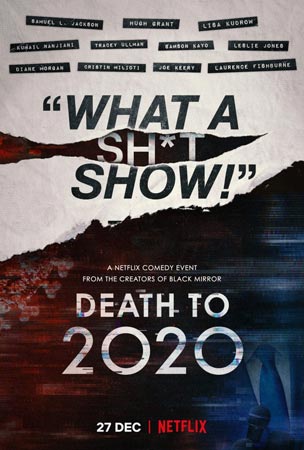 You watch “Death to 2020,” “Black Mirror” creator Charlie Brooke and Annabel Jones’ mockumentary special now streaming on Netflix, with a blank stare. That’s because, by now, on December 27, most of us are war-torn and weary at the deflating end of a year from hell and, the last thing most of us want right now is a reflection of that year, writ in any form, echoed back to us. Despite the strained charms of talking heads representing various pandemic viewpoints, played by Hugh Grant, Cristin Milioti, Samuel L. Jackson, Leslie Jones, Lisa Kudrow, Tracey Ullman, and more, “Death to 2020” is profoundly unfunny. It’s a recap of the year peppered with charmless commentary and stereotypes seemingly drudged up from the bowels of Twitter — and from times we’d much rather forget, like when “Tiger King” reigned supreme. Billed as a documentary special, but at a quaint hour’s length to suggest more could be in store, “Death to 2020” is in serious trouble right from the credits.