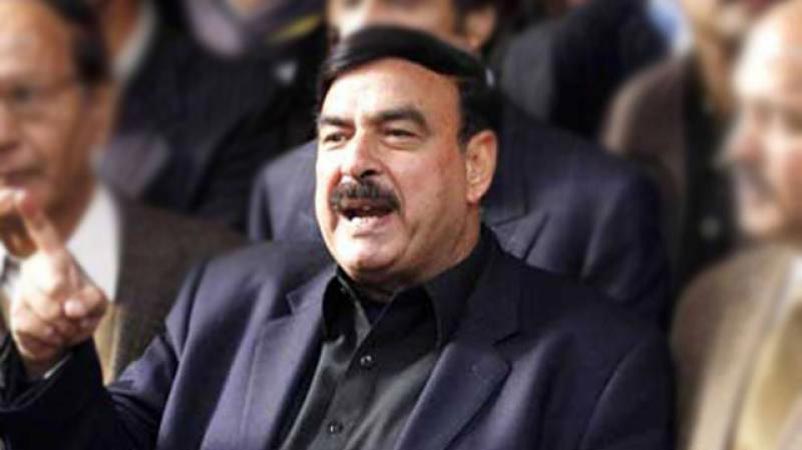 Federal Minister for Interior Sheikh Rashid Ahmed on Friday said the government would not renew diplomatic passport of Nawaz Sharif which was going to expire on February 16 and it would be considered as cancelled.

Addressing a press conference at a local hotel after winding up of his two days visit to Khyber Pakhtunkhwa and merged tribal district as Interior Minister, Sheikh Rashid Ahmed clarified that diplomatic passport of Nawaz Sharif was about to expire on February 16 and the government was in no mood to renew it.

He said currently Pakistan had no extradition treaty with Britain under which Nawaz Sharif could be brought back. However, efforts were underway on all fronts to bring him back to face corruption cases.

He said the online visa system would help eradicate menace of corruption and ensure transparency besides addressing complaints of people especially with regard to China and Afghanistan. He said on the first day, the online system had received about two lakh applications for visa.

The interior minister said that 528 NGOs were working in Pakistan and added that action would be taken against those NGOs found involved in politics.

He said protection of holy places of minorities and their leadership was the top priority of the Government and Chief Minister KP has been directed to take strong notice of the recent Karak’s unfortunate incident.

He said protection of worship places of minorities and their leadership was constitutional and legal obligation of the government and no one would be allowed to take law in their own hands. To a question about damage of Hindu saint shrine in Karak, the Interior Minister said such incidents was not acceptable in the Prime Minister Imran Khan led Government and reiterated that strict action would be taken against responsible.

The Interior Minister said the use of indecent language against armed forces of Pakistan would not be tolerated and the case of JUIF leader Mufti Kifayat has been sent to KP Government for necessary action, adding law would take its own course whosoever use un-parliamentary language against the country’s armed forces.

The interior minister said he paid a visit to Torkham border and said that border management system with Afghanistan and other countries would be further strengthened as per international standards.

Sh Rashid examined the import terminal from where he was taken to the zero point of the border where Commandant Khyber Rifles Col Rezwan briefed him regarding security measures adopted at the border. The Minister expressed satisfaction over the prevailed safety measures at the border and said an additional plan will be formulated to modernize the crossing. Later on he visited the forces cantonment Landi Kotal and then returned to Peshawar.

He said the government strongly believed in freedom of media which has great role in democratic process and urged media houses to be more responsible while highlighting national and geo-political issues and guide the nation in right direction towards a prosperous and tolerant society. The Interior Minister strongly condemned the Indian’s nefarious designs against Pakistan and added that its media malicious propaganda stood exposed before world.

To a question about PDM, the interior minister said it was encouraging that PPP has decided to take part in senate election and by election and expressed the hope that PMLN would also follow the same. He claimed that PDM was out to create political chaos and instability in the country besides pushing Maulana Fazlur Rehman into a blind alley.

He said Mualana Falzur Rehman has currently no role in politics as his policies have already been rejected by masses in 2018 general election.

“Politics has always room for dialogue and mature politicians never reach to the point of no return.” He said the government would adopt strategy according to scenarios developed in wake of PDM decisions. The interior minister said problems in a democratic system was being addressed through dialogue and expressed the hope that PDM would sit together with Government for resolution of their problems within ambit of the constitution. He said concrete measures were being taken to bring down prices of all essential commodities, adding efforts were underway to overcome price hike this year. The Chief secretaries of all provinces were directed to take strong action against elements involved in price hike and hoarding and bring prices of essential commodities down. To a question, the interior minister said KP people had rendered matchless sacrifices in war against terror and had never surrendered before inimical forces. He said there was still threats to Peshawar, Rawalpindi and Lahore where security have been beefed up and patrolling of police were increased. Sheikh Rashid said law and order situation in KP including merged areas has significantly improved due to supreme sacrifices of armed forces of Pakistan, FC and police. National Assembly Parliamentary Secretary for interior, Shaukat Ali was also present.