After a year like this, expect a strange New Year’s Eve 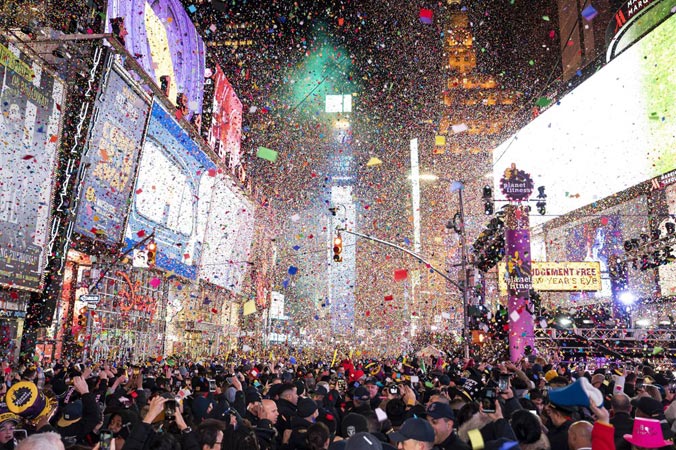 If ever a year’s end seemed like cause for celebration, 2020 might be it. Yet the coronavirus scourge that dominated the year is also looming over New Year’s festivities and forcing officials worldwide to tone them down.

From New York’s Times Square to Sydney Harbor, big public blowouts are being turned into TV-only shows and digital events. Fireworks displays have been canceled from the Las Vegas Strip to the Arc de Triomphe in Paris. Even private parties in some places are restricted.

The occasion stirs mixed feelings for people like Cesar Soltero, who was taking photos, and taking stock, in Times Square this week.

“I’m going to celebrate that I’m alive, but I’m not precisely too happy for this year,” said Soltero, 36, an engineer visiting from Orlando, Florida, after forgoing his usual holiday trip to see family in Mexico.

Simona Faidiga and Alessandro Nunziata strolled through Times Square with their Labrador retriever puppy, Maggie, who has given Faidiga a lift after she lost her tour guide job.

The Italian couple moved to Miami for new jobs in March, just as the pandemic froze tourism. He is working as a sales representative, but she is not back at work yet. And they’re not ready to declare 2021 will be better, not wanting to jinx it.

Days ahead of the ball drop in Times Square, it clearly wasn’t New Year’s as usual at the Crossroads of the World. There was room to roam on sidewalks that would normally be all but impassable.

Vendors’ carts and window displays at the area’s struggling gift shops flaunted few 2021-themed souvenirs as workers set up a stage for a celebration that will unfold this year without the usual throngs of cheering, kissing revelers. Police will block off the area so spectators can’t get a glimpse.

“It´s almost like a `Seinfeld´ episode,” Police Commissioner Dermot Shea said, invoking the 1990s “show about nothing.” “This is a ball drop about nothing, where you can´t see, so you may as well stay home.”

The event’s special guests will be first responders and essential workers. But they won’t be joining the mayor on stage to lead the countdown. Instead, each guest will watch from a private, well-spaced area.

The night’s performances – including disco diva Gloria Gaynor’s singing of the apt-for-2020 anthem “I Will Survive” – will be aimed at TV audiences.

New Year’s Eve will look different around the world after a year in which the virus killed an estimated 1.8 million people, including more than 330,000 in the U.S.

Germany banned the sale of fireworks, which residents usually set off in on the streets, and a pyrotechnics show at Berlin’s Brandenburg Gate is off.

So, too, are the fireworks over the River Thames in locked-down London, where New Year’s Eve also marks Britain´s final economic split from the European Union. However, Big Ben, which has been largely silent since 2017 while its clock tower is restored, will sound 12 bongs at midnight.