In Mar-a-Lago, some revel and some rebel amid Trump’s last visit as president 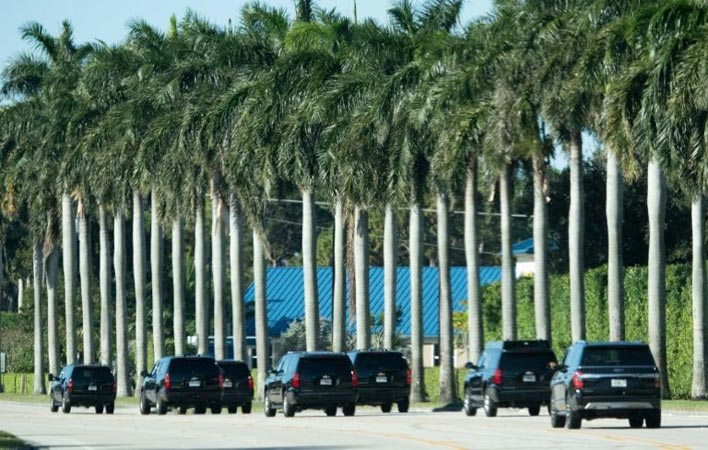 Donald Trump may soon be dislodged from Washington, but to core supporters in southern Florida he remains an unquestionable hero, their favorite occasional local, whose Mar-a-Lago presence draws global attention to Palm Beach.

The brash Republican is on his final holiday trip to his private club as president, inconveniencing some neighbors who find the area’s roads blocked as he shuttles between the “Southern White House” and his Trump International Golf Club.

He airs his election grievances on Twitter and, according to his office, hosts “many calls and… meetings,” seemingly ignoring the problems vexing Congress and alarming millions of Americans.

Soon he also may be forced to face a brewing dispute over his Mar-a-Lago resort, whose neighbors have filed a grievance claiming Trump has no legal right to live at the storied property.

But the concerns seemed a world away from the sidewalks of West Palm Beach, where diehard and mostly unmasked supporters welcomed Trump with open arms on Sunday as he returned from a golf outing.

“We love him. It makes all the locals proud to be Americans, seeing our president, the most powerful man in the world, driving by here,” carpenter Greg Mooney told AFP outside Corner Store Berto’s Bait and Tackle, where he and friends gather whenever Trump arrives for a stay.

They were among several hundred people who lined Southern Boulevard late Wednesday, cheering and waving US and Trump flags along the route to his resort across the Intracoastal Waterway in Palm Beach.

A huge “Trump 2020” banner covered the roof of a real estate office along the route, while American flags rose from pickup trucks bearing Trump paint jobs.

“Four more years!” and “Stop the steal!” supporters chanted, as Trump’s motorcade slowed so he could wave at one of the larger crowds to gather here since his presidency began.

Trump’s week-plus escape from Washington comes at a moment of deep national anxiety over his refusal to support the latest Covid relief package.

The $900 billion rescue, passed overwhelmingly by both houses of Congress but belatedly rejected by Trump, is seen as a lifeline for families struggling with financial woes or beset by Covid-19.

Mooney, 43, was less concerned with the rescue package than with Trump’s presidency coming to an end.

But he was heartened that so many well-wishers stood “shoulder to shoulder and double-stacked” Wednesday in what may have been a record showing, and said they are likely to keep at it.

“We’ll see him all the time,” Mooney said, nodding towards Trump’s resort.

That remains in doubt. Trump has officially changed his residence from New York to Florida, but Palm Beach neighbors are seeking to prevent him from living at Mar-a-Lago.

In a letter this month reported by the Washington Post, neighbors formally wrote the town of Palm Beach and the US Secret Service asserting that Trump signed away his legal right to live at Mar-a-Lago when he converted the property from his residence to a private club in the 1990s.

The dispute would put Trump in the highly awkward scenario of defending his choice of post-presidency residence.

“A lot of people would love to give him a hug and tell him, ‘Hey, we support you, thank you for everything you’ve done, and we know the truth,'” Mooney said.

Trump relentlessly peddles the baseless conspiracy theory that Democrats stole the November 3 election and handed the presidency to Joe Biden.

Several supporters in West Palm Beach, including Mooney, believe Trump’s false narrative and said they still hold out hope that the president miraculously stays in office.

Others, like Roger Everingham, can’t wait to see Trump gone for good.

The 82-year-old Biden supporter, who lives directly across the water from Mar-a-Lago, said he has grown frustrated with the area’s Trump frenzy.

“But it’s a lot of laughs, particularly when I watch the circus as he drives by,” Everingham, who ran Palm Beach’s iconic Colony Hotel for 20 years, acknowledged as he walked with Louie, his Chihuahua.

That raucous collection of Trump supporters is anything but spontaneous and local, he insisted, noting that most of his neighbors are Democrats.

“They come from somewhere else. They’re organized,” Everingham said of the crowds. Someone is “absolutely” tipping them off about Trump’s movements, he added.

One man who works on Southern Boulevard and supports Trump said he understands the frustration some have about the president’s presence.

“A lot of people don’t like him. They’ve been inconvenienced for years because he blocks the roads,” said the man, who asked not to be identified. A more permanent Trump presence could exacerbate problems that wealthy property owners have accessing Palm Beach Island.

One woman expressed her displeasure with Trump on Sunday by holding up a sign near his golf club that read: “Biden won, you lost, get over it!”

Mooney said he is already anticipating cheering Trump along the route in 2024.