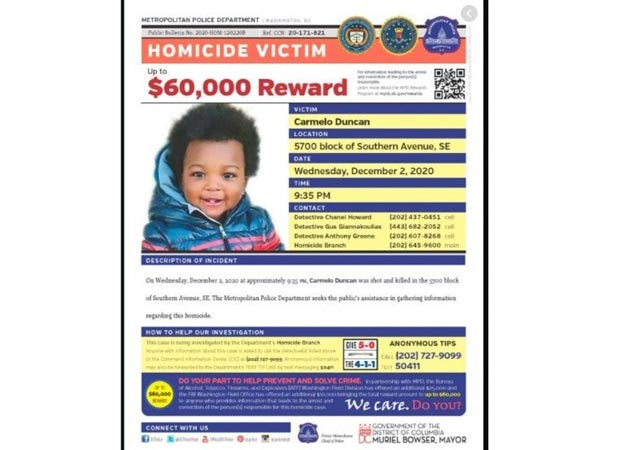 Carmelo Duncan was strapped into his car seat when he was hit by multiple stray bullets, becoming at just 15 months old one of the youngest shooting victims in the US this year — and a symbol of powerlessness in the face of gun violence.

On December 2, he and his eight-year-old brother were in a car being driven by their father through southeast Washington, DC, when unknown shooters opened fire on the vehicle before fleeing in a stolen SUV. The toddler died at the hospital. His father and brother survived the ambush, for which police say they don’t know the motive. Carmelo was the 187th victim of gunshot homicide this year in the American capital, out of 197 — the highest total in 15 years. The city had 196 shooting deaths in 2005.

Many US cities reported “historic levels of violence” in 2020, according to a report by the organization Everytown for Gun Safety — and young people are paying a heavy price.

This is due to a climate of violence following the police killings of Black Americans, and the Covid-19 pandemic that has closed down schools and youth programs. “As these critical supports have been shuttered, the void has been filled with gun violence,” said the Everytown report. Just a few days before Christmas, gun violence has already caused more than 18,500 deaths in the US in 2020, according to the Gun Violence Archive, including more than 1,300 minors. Of these, 284 were 11 years old or younger.