Time to ‘deliver’ has arrived: PM 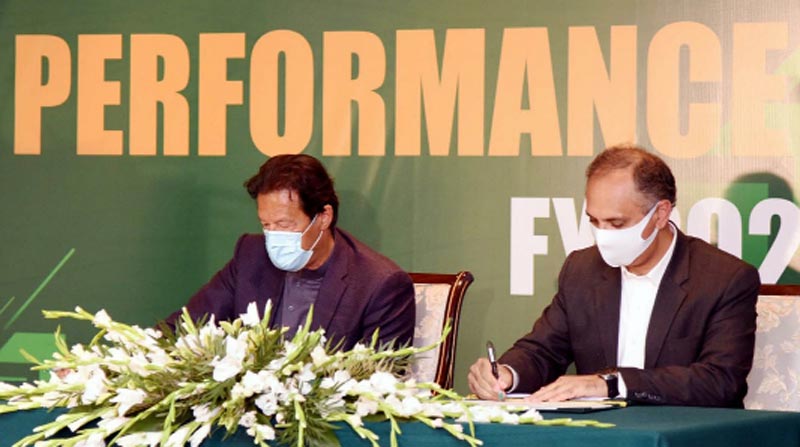 Prime Minister Imran Khan on Tuesday asked the federal ministries to deliver their best and address the challenges facing the country by prioritizing and channelizing the issues.

“There is no excuse for the government for any lack of experience. It is the time to deliver,” the prime minister said, as he inked ‘Performance Agreement of Ministries for the Year 2020-21’ with his cabinet members here at a signing ceremony.

The performance agreement is aimed at pacing up the working of federal ministries for an overall improved governance.

The prime minister warned that the persons found responsible for red-tapism in ministries, particularly in case of projects beneficial to the country, would be penalized.

The federal ministers, sitting side by side with the prime minister, separately signed the agreement, pledging to meet the set targets while implementing the government’s agenda of economic prosperity.

Imran Khan counted power generation, subsidies, inflation, exports, food security, pension system and agriculture as the ‘major challenges’ requiring action on urgent basis. “We will prioritize every sector or area having the potential to generate revenue,” he said.

Terming the power sector the most complicated and complex challenge, he said efforts were needed for its rationalization and synchronization to address the problem of circular debt. On subsidies, the prime minister said managing the huge financial burden of Rs 2,500 billion was a real challenge.

He endorsed the subsidies for the purpose of wealth creation or benefit of the under-privileged, however, opposed an across-the-board facility for the affluent.

The prime minister said the hefty amount of pensions in lieu of federal and provincial public departments was another “liability” that required an effective and affordable system.

Prime Minister Imran said another “mountain” of burden on the government was of pensions, saying they were increasing in all government departments and nobody really planned for them. He mentioned the pension scheme proposed by Dr Ishrat Hussain under Civil Service Reforms, which was based on Malaysia’s Dr Mahathir formula of ‘pensions converted into savings’. He told his adviser Dr Ishrat Husain, who was seated in the audience, that his pension scheme was awaited that could help make pensions less of a liability.

He said including the subjects of food security and environment in the provincial list under the 18th Constitutional Amendment made it difficult to meet the goals due to lack of coordination among the Centre and the provinces. He said a province, which did not release the wheat stock, put an undue blame on the Centre for an overall price inflation of the commodity.

The prime minister said increase in agricultural productivity was vital and mentioned that Pakistan was adopting techniques from China under transfer of agri-technology linked with the Economic Corridor. He said the economy had made a remarkable turnaround in two years with current account witnessed in surplus for the last consecutive five months. “To ensure continuity of positive economic indicators, it is important to identify the pitfalls in advance,” he said.

Imran Khan lauded his Special Assistant on Establishment Shehzad Arbab for the initiative of performance agreement of ministries, which would ensure good governance.