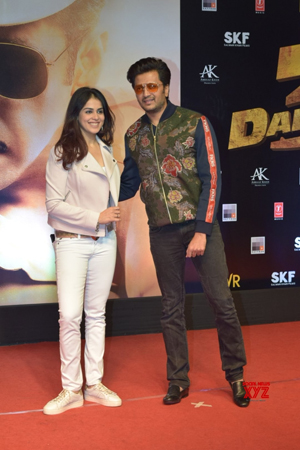 The duo currently stars in the game show ‘Ladies vs Gentlemen’ which streams on Flipkart Video. However, their fans still await to see them in a movie together. In a recent interview to the Hindustan Times, Genelia and Riteish spoke about their condition of working on a film with each other. Riteish’s succinct response was, “A good script”, while Genelia said she is waiting for something special.

“I always say that my first film was with Riteish and before I went on this big sabbatical, the last film I did was with Riteish as well. So to be back again with him, I am looking for something very special. We are looking forward to working together,” the ‘Jaane Tu… Ya Jaane Na’ actress said.

Riteish who turned 42 on Thursday made his Bollywood debut with Genelia in ‘Tujhe Meri Kasam’ in 2003.

Genelia D’Souza and Riteish Deshmukh got married on February 3, 2012. They have two sons. Riaan was born on November 25, 2014, while the couple welcomed Rahyl on June 1, 2016. On the professional front, Riteish’s last film was Tiger Shroff’s ‘Baaghi 3’. Genelia was last seen in the much-delayed film – ‘It’s My Life’, opposite Harman Baweja.