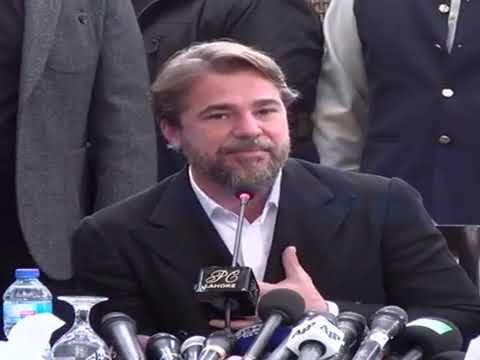 Engin Altan of Turkish drama Ertugrul fame is all set to speak to Pakistanis in a presser, scheduled to take place on Friday.

According to reports, the Turkish star will hold a media talk at 11:30AM, after arriving in the country a day earlier.

Addressing a press conference in Lahore on Friday, Engin Altan, who portrays titular role in historical drama series Dirilis: Ertugrul, revealed that he had signed some new projects in Pakistan, adding that he was set to become a brand ambassador for a private textile company.

Talking about popularity of Dirilis: Ertugrul in Pakistan, the Turkish actor said it was great pleasure for him that Prime Minister Imran Khan praised the drama series.

Engin Altan, who played the role of Ertugrul in the historical Turkish drama series Dirilis: Ertugrul, revealed during the press conference that he had signed some new projects in Pakistan. The Turkish actor had signed a deal with a private textile company to become its new brand ambassador.

Talking about the popularity of his show in Pakistan, Engin said it was a great pleasure for him that Prime Minister Imran Khan had praised Dirilis: Ertugrul.

Turkish actor Engin Altan Duzyatan aka Ertugrul, who is on a short visit to Pakistan, has said that he is ready to work in Pakistani drama series if he gets a good story.