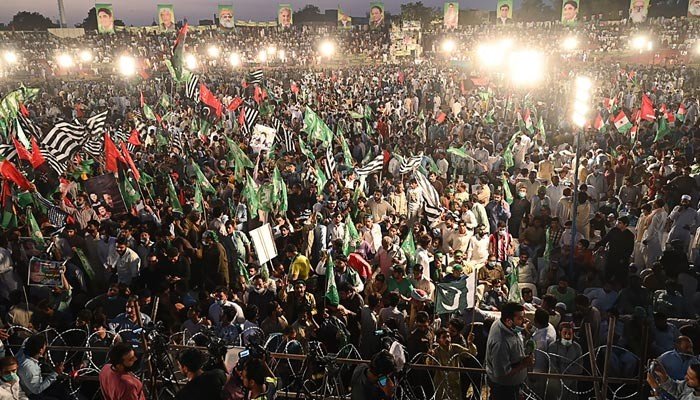 Leaders of the Pakistan Democratic Movement (PDM) on Monday said they will go ahead with the Lahore public meeting scheduled for Dec 13 despite the government warning of legal action.

The statement comes a day before heads of PDM’s constituent parties meet in Islamabad to review arrangements for the Lahore rally and to finalise a strategy for the next phase of its anti-government campaign.

The opposition alliance has decided to move forward with the Lahore rally despite the government citing concerns about the risk of Covid-19 spreading and warning of legal action.

Addressing today’s press conference in Lahore, PPP leader Qamar Zaman Kaira said the government had changed its tactics to try and stop the opposition from holding the rally.

“The premier doesn’t realise that these things don’t stop rallies. Martial law used much harsher tactics but rallies and movements did not stop.”

He added that the people of Pakistan were fed up with the government and the country’s state of affairs. “The time has come for them to go,” he said, adding that the government was “fascist”.

“There used to be some back and forth in politics, but the mud-slinging and culture of swearing that they [government] have brought during their tenure has never been seen before,” he said.

He added that the PDM had reviewed the situation and formed committees to prepare for the upcoming rally in Lahore. “The PDM leadership has decided that the Dec 13 jalsa will take place,” he said.

PML-N’s Rana Sanaullah said heads of the constituent parties will meet tomorrow and will visit the site of the rally and deliberate over the preparations. “Hundreds of thousands of workers will participate in the Lahore rally. This requires complete arrangements. They cannot be addressed without a proper sound system.”

He added that it was the job of the Lahore deputy commissioner to talk about administrative measures, not the premier’s. “[Imran] is saying that he will not allow arrangements for chairs and lights and will not allow a stage to be set up. And [in the same breath] he says he will not stop us from holding the rally”.

In an interview with a private TV channel on Saturday, Prime Minister Imran Khan had said the government would not grant permission to the opposition parties to hold their public meeting, but at the same time declared that it would not stop them from doing so.

The prime minister had said that cases would be registered against the opposition leaders and all those who would facilitate them in making arrangements for the public meetings in violation of the standard operating procedures to stop the spread of Covid-19.

“We have decided not to give them (the opposition) permission to hold its public meeting. FIRs will be filed against those providing them with a sound system and chairs,” the prime minister had said during an interview with Hum TV.

They tried to stop us in Multan, but we still held the rally, Sanaullah said. “When the government uses such tactics then the number of people that gather doesn’t matter. What matters is whether the rally was held or not.”

He added that the government and its representatives should have felt “ashamed” after the Multan power show.

“The jalsa will happen at any cost. People from across the province and the country will gather in Lahore and will express their dissatisfaction with the current government and will vow to put an end to the game that has been played for the last 70 years. The sanctity of the vote will have to be honoured.”

JUI-F’s Mohammad Safiullah said that the party’s stance since day one has been that the government is not the people’s elected representative and should go home. “On Dec 13, the people of Pakistan will show the government that they cannot stay as rulers and that they have been rejected.”

In response to the “threats” made by the premier, we want to say that this rally will be organised and will be held at Minar-i-Pakistan, he said. “There are no two opinions on this.”

He added that instead of issuing threats using the interior ministry, the premier should don the uniform of a station house officer.

The JUI-F leader was referring to a notification by the interior ministry dated Dec 6 through which it directed the provincial governments to take “immediate cognisance of the threat [posed by militias of political and religious organisations]” and adopt steps to check their functioning and development.

It stated that “certain political and religious organisations have established their militias which have even resorted to wearing uniforms/ ranks like formal armed forces/ law enforcement agencies” and considered themselves as military organisations which was a violation of Article 256 of the Constitution and point 3 of the National Action Plan.

The ministry said that it would aggravate the complex security situation if left unchecked.

During today’s press conference, Sanaullah stressed that the venue of the jalsa would not be changed at any cost.

He added that the PDM leadership had decided that at least 500 workers will be tasked with handling security and traffic arrangements. “Now if we give them a specific uniform or a cap, will they become a militia? This is ridiculous and a sign of the government’s panic. Our movement is peaceful,” he said.

Maryam invites supporters to Lahore rally
Addressing a large crowd at Lahore’s NA-128 constituency later in the day, PML-N Vice President Maryam Nawaz called out the premier for saying he will “not provide chairs and tents” for the PDM’s rally. “Tell me, do you need chairs,” she asked a cheering crowd.

Maryam also took the opportunity to invite the people of the city to the PDM’s upcoming rally. “The Lahoris will show their true colours. If this fake government stops you, will you stop? If permission for the rally is not given, will it not happen?”

She added that she had very “high hopes” for the city of Lahore as it had given Pakistan a “son like Nawaz Sharif”. She said the Lahore rally will show the government that its days in power are numbered.