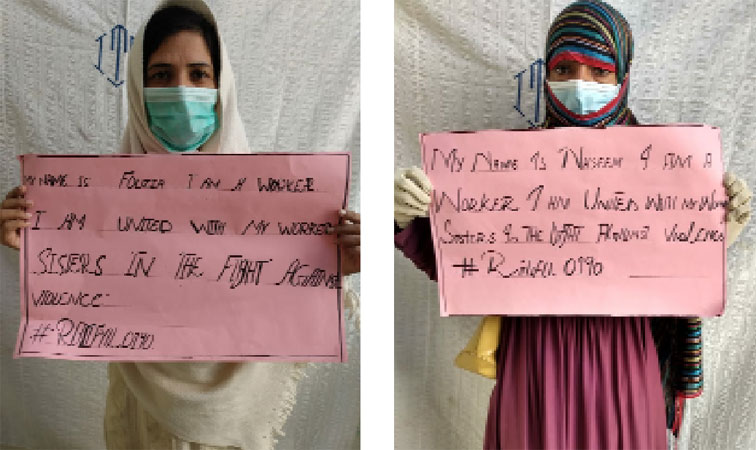 In the patriarchal structures of our society Violence against women is considered as a normal practice. Where no matter what working status a woman enjoys, she is seen in subordinate roles. Women are taught to be submissive and inferior beings. Both men and women can be victims of violence, however, women are more vulnerable due their positions within the home, at workplace and in society. Violence is any act or threat that result in suffering for women. This violence can be physical, sexual, economic and mental in nature. History tells us that women’ bodies have been objectified as a ground for wars. Women have faced oppression since the beginning of age. Over the years the common practice of Patriarchy has become deep rooted with creating a mindset that strongly see women as a problem to society and a threat to male dominancy.

HomeNet Pakistan (HNP) aims to work towards sustainable development goal, achieve gender equality and empower all women and girls. HomeNet envisions a society in which home based workers are ensured visibility, recognition, legal and social protection, and a decent standard of living. HNP shares stories of home based workers’ gender based violence and resilience.

Fouzia was married at a tender age without her will. Carrying orthodox mentality of early child marriage, her mother forced her into an arranged marriage. Her in-laws detested her presence and to them, she was a maid for their house. Socialized to be a submissive woman like many others in our society, Fouzia never raised her brows on her ill-behaved in-laws. When Fouzia gave birth to her first child, a daughter, she was being verbally abused by in-laws as bearer of “solely daughters”. Behavior of her in-laws worsened upon birth of her second daughter. She tolerated the abuse for the sake of her family and to protect their honor as divorce is associated with stigma for a woman. She thought that things will change as later she gave birth to a son, but soon her husband planned to go to Dubai for job, leaving her behind with his cruel mother, his sister and her husband. Aware of the lecherous acts of her male in-laws, Fouzia demanded her husband to shift her in a new house as she wasn’t comfortable with her male in-laws alone in his absence. Her husband refused to fulfil any such demands. Fouzia was more worried about her daughters than herself. All her pleas were disregarded by her husband which led her to take a strong decision to file for divorce. Unconcerned for her children, her husband agreed and fled to Dubai leaving Fouzia and 3 children behind.

Having dexterity in stitching and stone work Fouzia started as a home based worker to earn for her children. She was introduced to HomeNet Pakistan by HNP’ social mobilizer. Soon Fouzia became a member of HNP and attended numerous trainings to empower herself socially and economically. Among these trainings were financial literacy, leadership, ecommerce, 3-day capacity building, group formation, business development, digital literacy and training of trainers. With the help of these trainings, Fouzia was able to gain bargaining skills, communication skills, costing and soon she formed her own group of 50 women home workers. Initially Fouzia used to work for someone but with progress in work, she started getting work in bulk, enough to provide to her own group of workers.

She further attended the awareness sessions of HNP that included, awareness on HBWs law, study circle on early child marriage, Violence against women and exposure visits to market and women development department. The exposure visits acquainted her with the knowledge of various products and their worth in market, as well as, knowledge of women’ right. 95% of women home based workers are unaware of their rights as a women and thus end up becoming an easy victim of gender discrimination. Upon consulting the advocate through the exposure visit, arranged by HNP, Fouzia received guidance and soon filed a case against her husband for maintenance of their children. Fouzia believed she could’ve done this early but she was unaware of her rights and laws for women. She was at a stage where she begged her husband to stay and now she has empowered and become economically independent that her ex-husband wants to reunite with her. Fouzia believes she is much better off now and she will not sacrifice her peace for any further gender based violence.

Naseem, another woman who became victim of violence, among many others. She married at an early age with a guy who was her extended relative. Her family was unaware that her husband was a drug addict. She was deceived into marriage as her in-laws kept it hidden. Naseem, who was educated till college was married off to a completely uneducated guy from a village. Despite the fact that he was illiterate, Naseem’ family gave her daughter. When her family was informed about his drug addiction, they didn’t bother to free their daughter from him, in order to keep the family’ honor.

Drug addiction of her husband came to her as a shock after the birth of her first child. Naseem faced verbal abuse and physical abuse at the hands of her husband daily. When she informed her parents, they discarded her plea for help as something nugatory, indicating that this is what every woman face as a norm in society, thus, Naseem should also tolerate. Her family cared more about disturbance and rivalries in relation with extended family, rather than violence that their daughter was facing. Naseem accepted that ‘suffering’ was her fate.

Upon death of her husband, she wanted to come back to Karachi but her own parents weren’t willing to take her as her mother-in-law showed willingness to keep her, but little did she know about her intentions. Within two months her mother-in-law started abusing her and wouldn’t provide her food to eat. She ran away from village with her children and came to her parent’s house where she currently resides and earn for her 2 kids. She started work as a teacher but income was very less. Later she worked in survey, but that job was also short lived. She learned stitching and stone work on her own. After sometime, she attended trainings of HomeNet Pakistan, where she was introduced by social mobilizer. Upon receiving guidance from HomeNet Pakistan, she was linked with a social welfare organization that provides her monthly ration. Slowly and gradually, as a home based worker, she is able to earn enough for her children. Although, her earnings are not enough to do monthly savings but she earns enough to fulfill her basic needs.