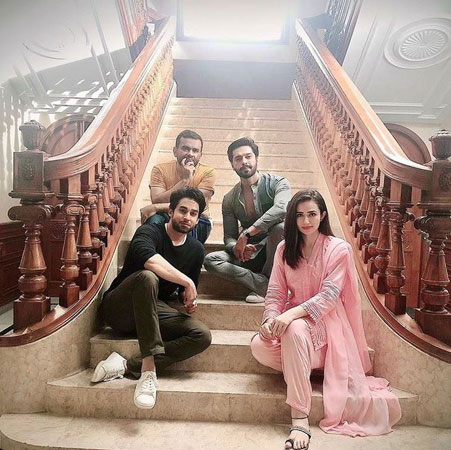 With a constant stream of harassment cases trickling in almost every day on the news, it wouldn’t be wrong to say that there are two pandemics wreaking havoc in this country.

There is no better time then than right now to shed light on this otherwise cloaked disease in our society, and that is exactly what ARY Digital’s latest release, Dunk, aims to do. The teaser for the upcoming drama serial, released earlier on Monday, was an intense yet all-too-real look at how exactly these situations can pan out; both for the harasser and the victim, and what happens if allegations are false.

Starring Sana Javed as Amal, Bilal Abbas Khan as Haider, and Noman Ijaz as Professor Humayun in starring roles, the serial promises passionate performances, as you would expect from the acclaimed cast.

The teaser starts off with Amal and Haider protesting outside Professor Humayun’s house with a bunch of their classmates, holding signs that read ‘Stop Harassment.’ We figure out that Amal has accused her professor, Humanyun, of harassment and so the story takes off.

Smartly done, the teaser doesn’t reveal too much, leaving the viewer questioning where the story could go from here. From Professor Humayun being heckled on the streets and at his daughter’s school, to his daughter asking him to not touch her, there is an attempt to humanise the character, but not to the point of glorification. It is interesting to note that the viewer is willfully reeled in with this, curious to know what happens next.

Will he get retribution? Will Amal get justice? or has Amal falsely accused her teacher of harassment? These are all questions that will make you want to watch the serial!

A tale of anguish, pain, disappointment, and passion for revenge, the story is the brainchild of Mohsin Ali, also the writer of Aisi Hai Tanhai.

It is directed by Badar Mehmood, under the banner of Big Bang Productions. It also stars Azekah Daniel and Yasra Rizvi and will soon be aired on ARY Digital.

The teaser has taken social media by storm. Here’s hoping that the serial manages to capture the essence and intricacy of this sensitive topic.