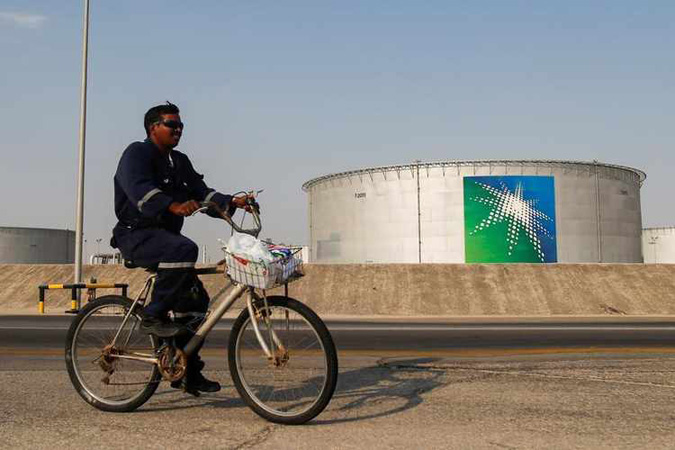 The pricing of Aramco’s $8 billion jumbo bonds this week has made clear that markets look at the oil giant as a proxy for Saudi Arabia, investors say, a change from last year’s inaugural bond issue that valued its risk as lower than the government’s. Saudi Aramco stunned global markets last year when, before a bond sale, it opened its books for the first time, revealing it was by far the most profitable company in the world. That $12 billion bond deal obtained more than $100 billion in orders, a record-breaking vote of market confidence for the world’s largest oil company. Both emerging markets and corporate investors poured money into those notes, which priced inside the Saudi government debt curve – a rarity as state-owned entities generally offer higher returns than governments. With its second foray in the international markets this week, Aramco raised $8 billion out of an order book that peaked at $50 billion. One source familiar with the matter said it was the highest over-subscription this year for multi-billion dollar deals. Hefty demand showed that investors continued to see the company as an attractive asset — despite lower oil prices and an attack on Aramco installations in September last year that revealed the vulnerability of the state-controlled oil company. But the pricing also indicates that Aramco is now seen as fully subordinate to the Saudi government. That perception was enhanced after the coronavirus outbreak weighed on global crude demand and Saudi Arabia and Russia engaged in a price war that threatened to overwhelm global oil markets with supply. “I think there was always an open question around where Aramco should be priced because it had such a pristine balance sheet when they first issued. But in the last year, oil prices have come down, they’ve taken on a bit more debt and the outlook for oil prices has changed significantly,” said Dino Kronfol, chief investment officer of global sukuk and MENA fixed income at Franklin Templeton.

Last year, some investors told Reuters the company was aiming to price its bonds off better-rated companies like Shell, Total, and Exxon, despite its rating being constrained by its sovereign links. Before that deal, Aramco told investors the Saudi government remained committed to Aramco’s governance framework to safeguard its independence even when oil prices dropped. “I think last year was a bit crazy in its pricing inside Saudi Arabia and was largely driven by crossover investors, with most EM investors viewing it as expensive inside KSA (Saudi Arabia),” said Richard Briggs, investment manager at GAM. Aramco’s profits plummeted this year, but it is sticking to a promised $75 billion annual dividend. That will go almost entirely to the Saudi government to help it contain a widening government deficit. The company’s new bonds were split into tranches ranging from three to 50 years – Saudi Arabia’s longest-dated international debt. Across all the tranches, Aramco offered good value, investors say. The bonds offered a premium ranging from 10 to almost 50 basis points over Saudi government bonds with a similar duration. Its new-issue premium – the price an issuer is ready to pay over its existing bonds to attract demand for the new issuance – was around 40 basis points. Sergey Dergachev, a manager of emerging-market debt at Germany-based Union Investment, said Aramco remains a very strong credit, and an “important proxy for Saudi risk.” “But, what is important to notice (is) that compared to their debut deal, Aramco learned a lesson and offered some new- issue premium concession, and this fact supported also the favourable performance of their bonds in the secondary market,” he said.