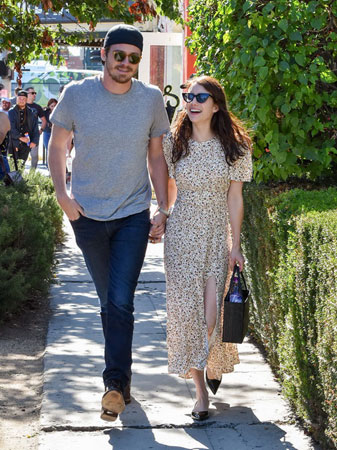 Garrett Hedlund is on the up and up after seeking treatment for alcohol abuse earlier this year. The Country Strong actor was arrested for a DUI in January and arraigned the following month at a Los Angeles courthouse, where a judge ordered that he seek counseling. His rep confirms to E! News, “When the incident occurred, Garrett immediately sought treatment which was successful. Today, he is in a solid and great place.”

In recent months, it was revealed Garrett and actress Emma Roberts are expecting their first child together and a source says they are “doing well” following his run in with police.

The insider explains that the actor’s DUI arrest “wasn’t something that actually threatened a split between them,” adding that “Emma is committed when she’s with someone and they are both conscious that it will take work.”

In recent months, it was revealed Garrett and actress Emma Roberts are expecting their first child together and a source says they are ‘doing well’ following his run in with police

Neither Garrett or Emma have discussed their relationship at length, but it’s clear they’re excited to start a family together.

In August, Emma confirmed her pregnancy and announced that they would be having a baby boy, sharing on Instagram, “Me…and my two favorite guys.” She included a photo of her Garrett wrapping his arm around her as they laughed.

But it wasn’t Emma or Garrett who let the cat out of the bag regarding their baby news—it was Emma’s mom, Kelly Cunningham. Kelly let it slip to an Instagram follower that she’s “very excited” to become a grandmother in the near future, which Emma wasn’t too pleased about.

In an interview with SiriusXM’s The Jess Cagle Show the Scream Queens star recalled how she punished her mom for spilling the beans. Roberts recalled. “Well, I blocked her just to prove a point.”

Garrett, on the other hand, has remained silent on all fronts, but that’s mostly because he has no social media presence. He previously explained to Esquire that he appreciates how social media connects people, but he has no desire to join any platform. He simply said, “It’s not me.”

Nonetheless, the pair has been a subject of interest since they first began dating in March 2019. At the time a source said their romance was “definitely not anything serious,” but clearly things have changed.