Tributes pour in for Maradona on 60th birthday 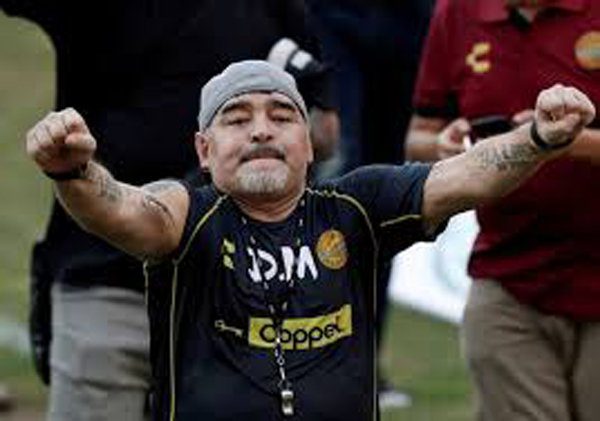 BUENOS AIRES: Diego Maradona celebrated his 60th birthday on Friday with a comprehensive league victory for the club he coaches, cake presented to him inside a shuttered stadium and a 100-metre long billboard erected in his honour in the centre of Buenos Aires. Although he had been reported to be self-isolating after coming into contact with someone who displayed COVID-19 symptoms, Maradona appeared at his club’s stadium on Friday evening. The Gimnasia y Esgrima coach unexpectedly turned up ahead of their game against Patronato, the first match in a season that kicked off on Friday night after a seven-month hiatus caused by the coronavirus pandemic.

Officials presented him with a plaque, he was given several birthday cakes and fans who gathered outside the ground sang “Happy Birthday” and let off fireworks. “It’s a special day,” head of the Argentine Football Association Claudio Tapia told local TV. “We’re very happy to be able to salute a player as great as Diego.” Maradona left the ground before Gimnasia kicked off their closed doors match and he missed their 3-0 victory. Earlier in the day, friends sent tributes to the flamboyant player best known for leading Argentina to the 1986 World Cup title.

A billboard featuring Maradona’s face was unveiled on Buenos Aires’ majestic central Avenida, alongside the obelisk where fans traditionally gather to celebrate major victories. On Instagram, football greats from around the world – former Brazil striker Ronaldo Nazario, manager Jose Mourinho and former Italy captain Franco Baresi among them – shared their best wishes. “I start my 60th with these marvellous messages that you’ve all sent me,” Maradona said in response. “Thanks for your love and your friendship. This is the best present you could have given me.” Maradona is widely acknowledged to be one of the greatest footballers of all time. He won the 1986 World Cup with Argentina and his two goals against England in the quarter-final victory ––- one the infamous Hand of God, the second a brilliant solo goal – are unforgettable moments in sporting history.

He also transformed Italian club Napoli, helping them to their first league title in 1987, as well as to the UEFA Cup in 1989 and another Serie A trophy a year later. But there was also a dark side that cost him dearly. Maradona’s drug addiction tainted his later years in Italy and led to him being kicked out of the 1994 World Cup and banned from the game for 15 months. Knee injuries took their toll as did weight problems and he was hospitalized in 2004 with severe heart and respiratory problems linked to cocaine use. He now often uses crutches to walk.