Guidelines for Marriage Halls and Marquees Reopening During COVID 19 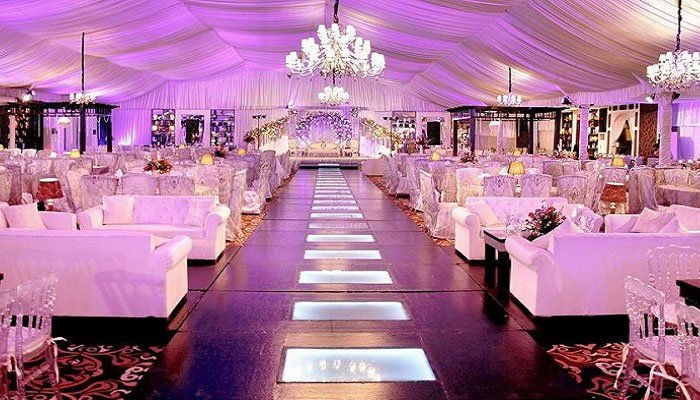 The National Command and Operation Centre (NCOC) on Friday issued new guidelines for marriage halls, restricting the number of attendants at indoor weddings to 300 and outdoor gatherings to 500.

A statement issued by the NCOC said that new guidelines were formed after “in-depth deliberations” and have been shared with the provinces for “strict implementation” to curb the spread of the novel coronavirus.

Under the new guidelines, apart from the limits imposed on the capacities, the events can only be held for two hours and must end by 10pm.

The statement said that if marriage halls are found to be in violation of the SOPs then they will be closed off at a “specified time” and a heavy fine will also be imposed. It further said that the closure of SOPs-defying marriage halls will come into effect two weeks after the notices are served so people get “sufficient time” to search for alternate venues.

The NCOC also said that the marriage hall owners will be required to reimburse the full amount to the families in case of closures.

The NCOC discouraged “large-scale public gatherings”, saying they have the “potential to cause exponential increase” in the coronavirus. It also said that such gatherings will also “jeopardise the success achieved” against coronavirus and should “ideally be avoided”.

“If some public gatherings are unavoidable, then these must be organised with strict compliance of the SOPs, for which deliberations are currently underway and will subsequently be decided at the NCOC,” said the statement.

Earlier this month, federal minister Asad Umar had warned that indoor restaurants were emerging as “high contributors to the COVID-19 spread”.

“NCOC today has directed all provinces and federating units to crack down on SOP violations,” the minister had tweeted. He had emphasised that the country must not allow “irresponsible behaviour” of some individuals to put everyone’s health at risk.

The authorities have also closed down multiple marriage halls and restaurants since their opening on September 15 for non-compliance with SOPs.