A year after Nobel, Abiy tries to beautify a divided Ethiopia 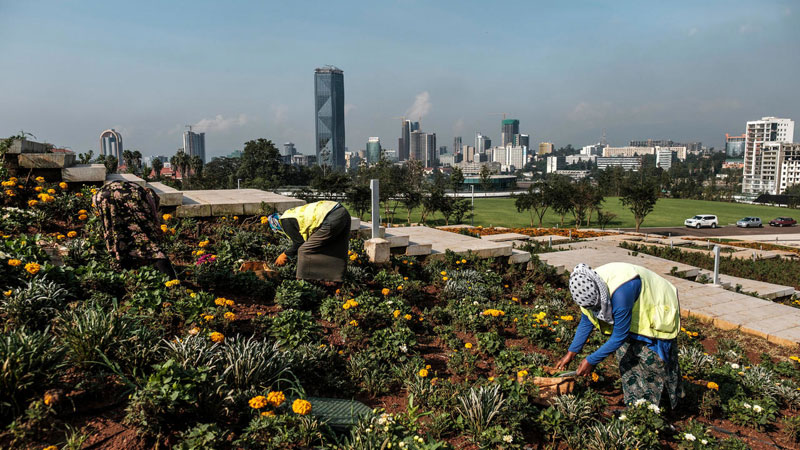 For the past year, workers have been busy transforming a disused plot of land down the hill from Ethiopian Prime Minister Abiy Ahmed’s office into a park showcasing his political vision.

The 48-hectare Friendship Square is rich in symbolism promoting unity: A fountain syncs with the patriotic hit song “Ethiopia” and an elevated speaker’s platform is flanked by 76 araucaria trees — one for each ethnic group represented in the upper house of parliament.

Yet one year after Abiy won the Nobel Peace Prize, there are mounting worries this unity message is ringing hollow.

Police and soldiers are increasingly resorting to lethal force against demonstrators.

And several opposition leaders have been locked up on terrorism charges, casting doubt on whether landmark elections expected next year will represent a true break with Ethiopia’s authoritarian past.

Amid the turbulence, Abiy has paid careful attention to Friendship Square, often visiting the site late at night to take stock of progress, according to aides.

His press secretary Billene Seyoum told AFP the park and other beautification sites in Addis Ababa are “representations of how fast we can engage in projects, turn them around and deliver them for public utilisation”.

That approach, though, echoes former Ethiopian leaders who rushed to put their stamp on the capital, shunting aside other voices, said Biruk Terrefe, a researcher at Oxford who has studied Abiy’s development ambitions.

“The decision-making around these urban projects has been reminiscent of past administrations. Many of the city’s urban planners were sidelined.”

Abiy was appointed prime minister in 2018 after years of anti-government protests and his 2019 Nobel win seemed to briefly revive the “Abiymania” of his first months in office.