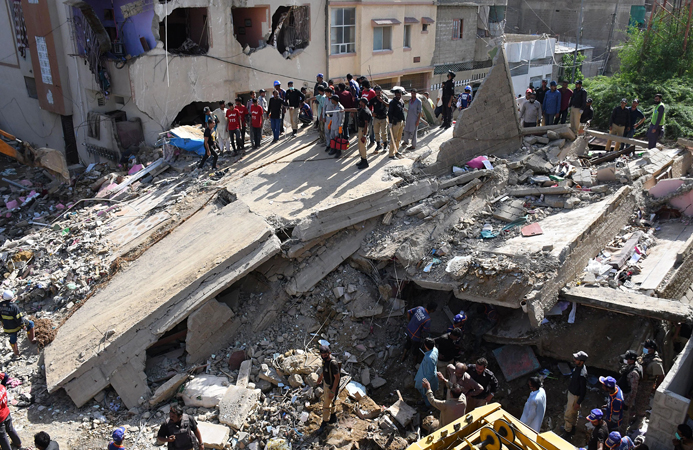 At least two people were killed and eight were injured after a multi-storey residential building collapsed in Korangi’s Allah Wala Town on Thursday.

According to the district administration, the multi-storey building had started sinking into the ground and had been “emptied” on the orders of the deputy commissioner two days ago.

Officials said that as per the latest update, only one family was currently living in the building while the others had vacated it.

Meanwhile, witnesses in the area claimed that the building had collapsed because its foundation had weakened as rainwater had accumulated in the basement. They added that the water was not drained despite multiple requests to the concerned officials.

They also said that one building had collapsed on another.

This is the third such incident to have taken place in the metropolis this year. In June, a five-storey building collapsed in Karachi resulting in the deaths of at least 22 people.

In March, a building collapsed in the Gulbahar area, killing 27 people and injuring at least 17 others.

A month after the residential building collapsed in Lyari, the civic administration asked the provincial authorities to delist more than 50 ‘dangerous’ buildings from the list of structures listed under the Sindh Cultural Heritage Protection Act as protected heritage so that these could be demolished for public safety.