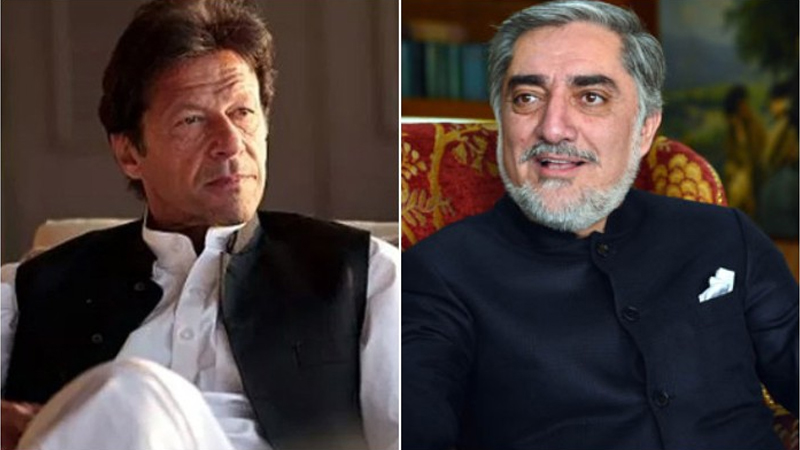 Prime Minister Imran Khan on Wednesday urged Afghan leaders to seize the ‘historic opportunity’ for peace in Afghanistan and hoped for early commencement of Intra-Afghan talks.

During a phone call with Chairman of Afghan High Council for National Reconciliation Dr Abdullah Abdullah, Prime Minister Imran Khan reiterated Pakistan’s commitment to further deepen brotherly ties and enhance cooperation in all fields. According to a PM Office press release, the prime minister emphasized importance of Pakistan-Afghanistan bilateral relations, which are based on commonalities of faith and culture, shared history, and fraternal bonds between the two peoples.

Highlighting Pakistan’s positive contribution to the Afghan peace process, the prime minister stressed that the Afghan leaders must seize this historic opportunity to achieve an inclusive political settlement, contributing to durable peace, security and prosperity in Afghanistan. “Pakistan looks forward to the commencement of Intra-Afghan negotiations at the earliest,” the press release quoted the prime minister as saying.

Imran Khan underlined his long-standing belief that there is no military solution to the conflict in Afghanistan and that a negotiated political settlement is the only way forward. The prime minister extended best wishes to Dr Abdullah Abdullah as chairman of the High Council for National Reconciliation and expressed the hope that the council will successfully achieve its objectives. He also reiterated the invitation to Dr Abdullah Abdullah to visit Pakistan at the earliest to share perspectives on advancing the Afghan peace process and forging closer ties between the two countries.

In a tweet, Dr Abdullah Abdullah appreciated Pakistan’s support in the Afghan peace process. “We reiterated on the unique opportunity to reduce violence, start [Intra-Afghan] talks and pursue a path to a dignified and durable peace,” the Afghan leader said, of his conversion with Prime Minister Imran Khan. “I thanked the PM for invitation, and [will] visit Pakistan in near future,” he added.

With Special Assistant to PM on Overseas Pakistanis and Human Resource Development Zulfikar Bukhari as its convener, the committee comprises members including secretaries or representatives from ministries of industries and production, interior, defence, communications, aviation, religious affairs and inter-faith harmony and climate change, all chief or additional secretaries, chairman of Evacuee Trust Property Board, deputy governor of State Bank of Pakistan and managing director of Pakistan Tourism Development Corporation. The committee will act as a focal point for inter-provincial, inter-ministerial, inter-department and inter-agency coordination to resolve implementation issues with respect to tourism sector development. With secretarial support of the Cabinet Division, the committee will review integration of provincial and regional policies regarding actions towards implementation of national tourism strategy.

The committee has been tasked to do geo-mapping of all tourist spots and profiling of hospitality business, related products and services. The newly set up body will also identify policy and legislative impediments in tourism development and give concrete recommendations to create an enabling environment for the sector. The committee will devise an effective regulatory and implementation mechanism of national minimum standards while ensuring its monitoring and coordination with all stakeholders for strict compliance. It will work on promoting tourism investment through public-private partnership, small and medium enterprises and with access to capital besides overseeing availability of international standard feasibility for viable projects. The committee will devise a strategy to ensure affordable domestic tourism in a systemic manner. Other areas of work include suggestions on formal training for skilled human resource development and issuing instructions to relevant ministries, departments and stakeholders for coordination.

Meanwhile, Prime Minister Imran Khan said that it was their foremost duty and top priority to enable the weak and poverty-stricken segments of society to meet their basic requirements. The prime minister chaired a meeting over the government’s system of providing subsidy on basic commodities of life to the weaker and low-income groups more effective. The meeting considered various proposals for further improvement in the government’s system for provision of subsidized basic commodities to the poor and low-income groups of the society.

The prime minister directed his special assistant on social protection, secretary finance and Utility Stores Corporation to give final shape to the proposals regarding provision of targeted subsidy on the basic daily-use items for the poor and low-income group. Addressing the meeting, the prime minister further said that government is striving to ensure this system functioned more effectively, transparently and well-targeted. It was also being ensured that amount from the government’s exchequer should be spent judiciously, he added.