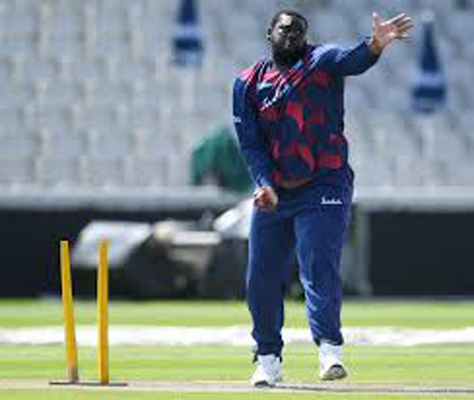 NEW DELHI: At 6’6” and 140kg, Rahkeem Cornwall would struggle to fit into anyone’s perception of what a modern day cricketer should look like but the West Indies off-spinner says he knows exactly how to get the best out of his big frame on the pitch. While his talent was recognised early on, the 27-year-old only made his Test debut against India in August last year. Three months later, he claimed his first 10-wicket match haul against Afghanistan and also played in the third and final test against England last month. “Everybody’s not going to be small,” the towering spinner told Reuters from Trinidad. “I just stick to my strength and do what I know I can do and perform.” With his height, Antigua-born Cornwall generates more bounce than most off-spinners and combines it with his accuracy to trouble batsmen.
“I think my height has played a big part … I also have to put the ball in the right areas to get the ball to spin,” said Cornwall, who is considered the heaviest player to have played test cricket. Blessed with soft hands and sharp reflexes, Cornwall has also grown into a safe slip-catcher, illustrated by his stunning one-handed grab to dismiss England opener Rory Burns in Manchester last month. “I think my hands are good. I think I’m a good catcher of the cricket ball, so fielding in the slip comes easy to me. “I can field in different positions but I just prefer to be in the slip because I can catch.” Cornwall went wicketless in the Manchester Test, where England triumphed by 269 runs to complete a 2-1 series victory, but he said it was a learning experience.