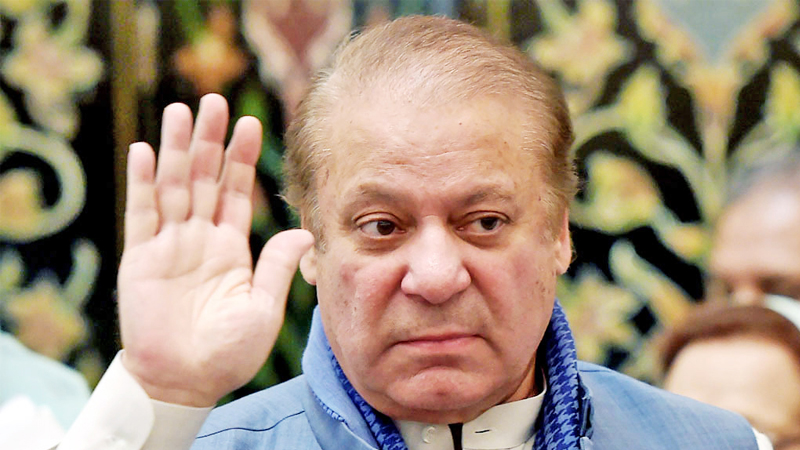 Prime Minister Imran Khan’s Special Assistant on Accountability Shahzad Akbar on Saturday said that former prime minister Nawaz Sharif had left the country for treatment on certain conditions and that none of those had been fulfilled.

“Nawaz was permitted to get medical treatment from abroad subject to returning within the stipulated timeframe. Secondly, he was bound to submit his periodical medical reports and updates on his treatment to the court and the Punjab government,” Akbar told a press conference in Lahore. He claimed that Nawaz had submitted no such report to either the court or the Punjab government.

“On August 18, the IHC declared Nawaz an absconder as his bail has expired. The federal government has decided to take matters forward with the help of NAB,” he said. “This dual standard of accountability cannot take place in Pakistan as common people who hardly get parole, return [to serve their sentence] and Nawaz is enjoying his life in London,” he added.

Akbar said that this is not a personal vendetta and that it was the government’s objective to uphold the writ of law. “The legal standing of the undertaking that Shehbaz had submitted will also be probed as he is responsible for ensuring Nawaz’s return,” Akbar said.

Referring to Nawaz Sharif’s seven-year-imprisonment sentence in the Al Azizia Steel Mills case, Akbar said that the former premier “will not be able to enter practical politics for the next seven centuries even”. “You have been declared disqualified for life. Your picture can be up on a wall but you will never be able to enter politics,” he said, addressing Nawaz.

Speaking of Britain, he said that Pakistan has an agreement with the country for the exchange of criminals. “The law is the same everywhere for criminals,” he said, adding that a criminal such as Nawaz can be likened to one that has broken out of jail and run off. He said that NAB is the institution that will pursue Nawaz’s case as it falls within its jurisdiction.

The premier’s aide also spoke of Ishaq Dar, also declared an absconder by an accountability court in 2017 and who is currently residing in London. “We won’t let go of Ishaq Dar either. We will bring him back,” he said, adding that Nawaz’s children will also be brought back.

Addressing Shehbaz, he said the PML-N president “is free nowadays and should appear before NAB”. Akbar said that the relevant institutions have stepped up efforts to prosecute Jahangir Tareen and Salman Shehbaz. “If these people resist against being a part of the probe, we will issue red warrants against them,” he added.

Talking about ‘NRO plus plus’ – a reference to the opposition’s proposed amendments to the National Accountability Ordinance (NAO-1999) – Akbar said Imran Khan won’t even give the ‘N’ of ‘NRO plus plus’ to the opposition, urging the opposition to stop making a joke out of the legislation. He said that Pakistan is in danger of moving from the Financial Action Task Force’s grey list to black list. “If Pakistan were to be pushed into that list, we would become like Iraq and Iran after the wars. We wouldn’t even be able to import medicines [due to the sanctions imposed].”

The premier’s aide, speaking on how the country had been placed on the grey list, said that the FATF had noted that Pakistan did not have a good enough system to tackle money laundering. “How could have this been possible when the country’s ruling elite themselves were involved in this menace,” he said.

Supporting his claim, he gave the reference of the fake accounts case filed against Asif Zardari, and the various cases against the sugar mills implicating other opposition leaders. “All the watchdogs were made non-functional and an institutional capture took place that was noted by the international forum,” he said, adding that the government took the measures recommended by the FATF.

The opposition wants the government to grant them ‘NRO plus plus’, which is not possible. “The entire world is fighting against money laundering […] I urge opposition to think beyond the cases filed against their leaders.”

Federal Minister for Science and Technology Fawad Chaudhry said on Saturday that former prime minister Nawaz Sharif’s departure to London for medical treatment caused a great setback to the narrative of the ruling PTI, as well as the process of accountability. The federal minister took to Twitter, saying that approaching the British government for the return of the PML-N supremo and an inquiry into medical reports were steps in the right direction. “Those who played a role in the preparation of the fake reports, they should be turned into examples,” said the minister in the cryptic post.