Pandemic threatens to undo a decade of Latin American progress 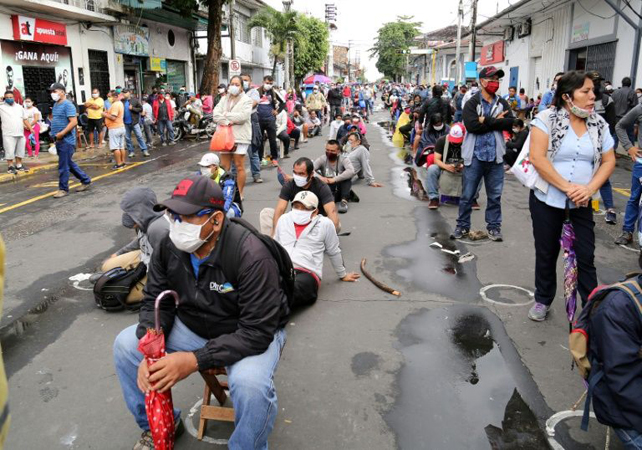 Almost six months after it was first detected in Latin America, the coronavirus death toll has reached 250,000 and exacerbated poverty and inequality, threatening to undo a decade of slow social progress.

Among the 620 million people in the region, 6.4 million have been infected.

In marginalized neighborhoods the virus has spread alongside financial desperation due to the economic meltdown caused by lockdown measures, with thousands of families facing a stark choice between shielding themselves from the virus and trying to fill their stomachs.

In the worst cases, they’ve been unable to do either.

“Because of this pandemic I was left unemployed. There are days when we don’t eat,” said Milena Maia, who lives in a modest home in Heliopolis, which with 200,000 people is one of the largest favelas in Sao Paulo, Brazil.

The 36-year-old single mother worked as a cleaner but now relies on handouts from an NGO to feed her three children.

She told AFP she knows people that died of COVID-19 and “many that are infected.”

Priscila Tomas da Silva, her husband and six children had to leave the home they were renting and build their own makeshift accommodation from wood and plastic in a parking lot for trucks on the outskirts of Sao Paulo.

Within a few weeks, 700 such shacks sprung up in the parking area, creating a new favela.

Latin America represents nine percent of the world’s population but has provided 40 percent of COVID-19 deaths in the last two months.

That “shows us how big the impact has been,” Luis Felipe Lopez-Calva, Latin American director for the UN Development Programme (UNDP) told AFP.

Without effective political reaction, “at a regional level we can talk about a regression of up to 10 years in the levels of multidimensional poverty,” he added.

Faced with surging cases, many governments — such as Peru, Argentina and Venezuela — have rolled back on the easing of confinement measures and pledged support for the poorest sectors of society, although it’s often been meagre or failed to reach those that need it.

But some experts warn those measures could weaken already fragile social protection systems.

“There’s not enough State presence and it’s disorganized,” he added.

Throughout the region, people have set up communal kitchens to help those worst affected.

Yet anger is widespread. Chile saw violent protests a few weeks ago with road blocks and looting, while in Bolivia people marched demanding government solutions.

The UN Economic Commission for Latin America and the Caribbean (ECLAC) predicts unemployment could reach 13.5 percent this year — meaning 44 million people out of work, 18 million more than in January.

The regional economy is also expected to shrink by nine percent.

The World Labor Organization warns that two thirds of people have either lost their job, lost work hours or earnings.

As a result, the pandemic has pushed 45 million people out of the middle classes. There are now 231 million poor: 37 percent of the population, according to ECLAC.

Peru, which has enjoyed above average growth in recent years, has seen its GDP shrink by 17 percent, with the number of middle income families receding.

That’s what happened to Sara Paredes and Raul Cisneros, who saw their income disappear from one day to the next.

“It’s five months since anyone gave me a translation,” said Cisneros, 46, a translator and Quechua teacher.

Paredes, 45, has been unable to perform in the theatre or give classes in Lima’s School of Fine Arts.

On top of the health and economic crises there’s also been an increase in deaths from treatable disease, such as dengue, and domestic violence and truancy.

In countries such as Guatemala and El Salvador, hugely dependent on remittances, gang violence has risen again after initially subsiding when the virus struck.

“That’s to say those with high inequality, ineffective policies and public institutions, with low trust in the institutions and fiscal incapacity,” he continued.

ECLAC has pushed governments to provide a basic income and food stamps during the crisis.

It has also called for debt grace periods for small and medium-sized companies and greater access to finance under favorable conditions for middle income countries, particularly in the Caribbean.