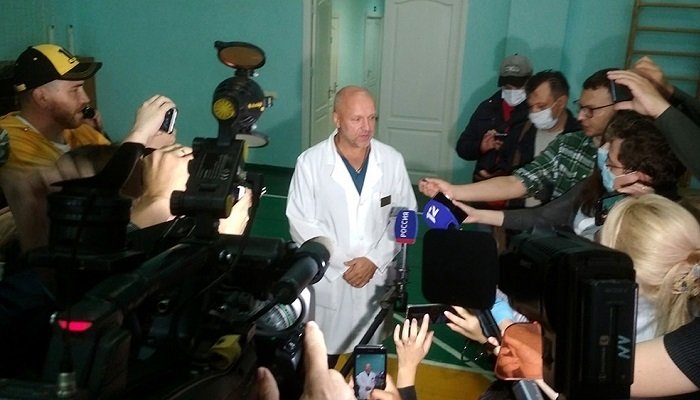 OMSK, RUSSIA: Leading Russian critic Alexei Navalny on Friday was battling for his life in a Siberian hospital after an air ambulance was dispatched to fly him to Germany for treatment. He was allegedly poisoned.

Navalny, a 44-year-old lawyer and anti-corruption campaigner who is among President Vladimir Putin’s fiercest critics, was hospitalised in the city of Omsk after he lost consciousness while on a flight and his plane made an emergency landing.

Navalny’s spokesperson Kira Yarmysh said he was on a ventilator in a coma and his condition was serious but stable.

“Alexei has toxic poisoning,” Yarmysh wrote on Twitter, describing how he was taken ill during the flight from the city of Tomsk to Moscow.

The hospital has not released any diagnosis while the regional health ministry said Navalny´s coma was not medically induced.

“I hope that he can recover and… he can receive from us all the help and medical support needed,” Merkel said in a joint news conference with French President Emmanuel Macron.

Navalny´s team had said earlier that the hospital in Omsk was ill-equipped and his doctor Anastasia Vasilyeva said she had asked for the Kremlin´s help to transfer him to a European clinic.

Peskov said claims of poisoning were “only assumptions” until tests proved otherwise.

Yarmysh claimed Putin was responsible for poisoning Navalny, saying: “Whether or not he gave the order personally, the blame lies with him.”

Something in his tea
Navalny’s wife Yulia travelled to visit him in the city about 2,200 kilometres (1,400 miles) east of Moscow.

“We think that Alexei was poisoned with something mixed in his tea. That was the only thing he drank in the morning,” Yarmysh wrote on Twitter.

She told the Echo of Moscow radio station that she was “sure it was intentional poisoning”.

“We can’t rule out that he drank or took something himself yesterday,” the source said, a claim Yarmysh dismissed as “complete rubbish”.

She said that Navalny seemed “absolutely fine” when they went to Tomsk airport.

“Straight after take-off he quite quickly lost consciousness.”

Political analyst Tatiana Stanovaya said that Navalny had “hundreds of enemies including some hardened individuals”, pointing to his anti-corruption investigations that attract millions of views online.

Amnesty International urged Russia to hold a “prompt and independent investigation” into the incident while European Union foreign affairs chief Josep Borrell said “those responsible must be held to account” if the suspected poisoning was confirmed.

Muscovites said they suspected Navalny was poisoned over his political views.

“I think this is a deliberate attempt on his life because he has fought so fiercely with the government lately,” said 18-year-old student Yaroslav Lyangasov.

Previous attacks
Navalny has suffered physical attacks in the past, including a 2017 incident where he endured chemical burns to his eye after green dye was splashed on his face.

Last year Navalny said he suspected poisoning when he suffered rashes and his face became swollen while serving a short jail term after calling for illegal protests.

A charismatic lawyer and whistle blower, Navalny has been travelling the country to promote a tactical voting strategy to oppose pro-Putin candidates in regional elections in September.

He has been the target of multiple criminal probes and spent numerous stretches in police cells for organising illegal protests, while his Anti-Corruption Foundation is regularly raided by police and investigators.

Thursday´s incident follows several infamous poisonings of Kremlin critics in the past.

Britain named two Russian spies as suspects after Russian double agent Sergei Skripal and his daughter Yulia were poisoned with the nerve agent Novichok in the city of Salisbury in March 2018.

Former Russian security service agent Alexander Litvinenko was fatally poisoned with radioactive polonium in a cup of tea in London. Russia refused to extradite chief suspect Andrei Lugovoi, who became a nationalist MP after the 2006 attack.

Several other opposition figures have suffered severe illnesses in Russia that they blamed on poisoning.