Despite the Covid-19 pandemic diluting the importance of other burning issues, the border crisis between China and India grabbed a good deal of global attention. 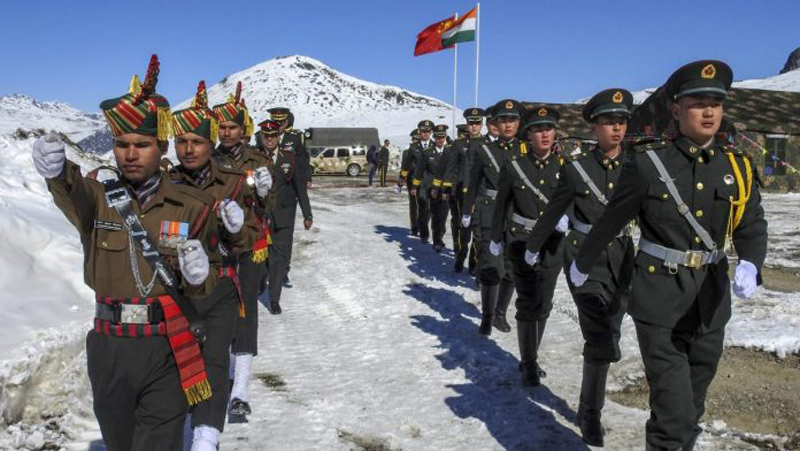 It was feared that two “Asian giants” had been on a collision course. It may escalate to a major confrontation. When the move followed the deadly fighting between Chinese and Indian troops at the border region, the risk of direct military confrontation and even “limited war” grew. Although there has been no use of firearms, this is, perhaps, because of the agreement of 1993 to resolve boundary question through “peaceful means,” yet the danger of clash lurks in the region that would have serious ramifications on regional security dynamics.

That China poses a security threat to India is made a pretext by New Delhi to intensify the efforts of “military modernisation” to increase its conventional capability at the operational or strategic level of war. It may add some credibility to India’s strategic deterrence before Chinese modernised military. Given that an already volatile regional strategic environment, military modernisation by India disrupts the regional balance of power and creates a security dilemma generally for regional countries, particularly for Pakistan.

Recent military face-off with China at a time that tension is running high between the US and China will push India further into the US orbit. Since the US is forming regional alliances to contain China and arrest its influence, India’s geographical proximity to China and other important strategic zones such as the South China Sea or the Indian Ocean or other sea lines of communication (SLOC) will be a strategic miracle for the US to advance its geopolitical objectives and put China at a strategic disadvantage.

Certainly, in the aftermath of the China-India border crisis, the Quad (Quadrilateral Security Dialogue), an informal military alliance between the US, Japan, Australia and India, receives a new boost. This pseudo-Nato version military alliance in the Indo-Pacific region, as NATO has been in the transatlantic region against erstwhile USSR, is aimed to mimic the “Cold War I” military policy to contain China in this emerging “Cold War II.”

India will endeavour to cash in on US-China rivalry by portraying China a “common enemy” of both the US and India to get diplomatic support over Kashmir issue; New Delhi also seeks Washington’s support for its bid to become a member of the NSG and a permanent member of the UNSC. Indeed, China obstructs India’s this move anyway, but India increases its oppressive approach to deal with the Kashmir issue without much condemnation from the US.

China’s “assertive” move at Ladakh region would have internationalised the Kashmir issue as Pakistan has been diplomatically lobbying at international forums to make it an international issue since India’s revocation of Kashmir’s special status on August 5, 2019; India considers it as its internal issue and/or bilateral issue between India and Pakistan since both countries have agreed in Shimla Agreement in 1972, but scrapping Kashmir’s autonomous status has made the agreement a dead letter.

Moreover, recent China-India military standoff brings closer regional countries that are suspicious of Beijing’s growing influence to develop a coherent containment strategy to either strategically encircle China or sponsor “strategic proxies” against it. The primary focus of rival coterie would be to thwart Chinese ambitious One Belt One Road projects (OBOR), particularly its flagship project, the China-Pakistan Economic Corridor (CPEC).

Since India was humiliated during a “violent face-off” in the Galwan Valley of Ladakh when Chinese troops reportedly killed at least 20 Indian soldiers, including a commanding officer, New Delhi would attempt to launch a “false flag operation” against Islamabad to recuperate its decayed morale; it also increases its subversive activities inside Balochistan to disrupt law and order of the province. A destabilised Balochistan, indeed, neither allows Pakistan to be politically and economically stable nor does it sound well for the success of the China-Pakistan Economic Corridor where China has been investing billions of dollar.

In changing regional geopolitics, China’s quest has been to secure its sponsored economic projects and explore new investment destiny to develop alternative maritime routes other than the South China Sea to import oil to meet its energy need. India’s nefarious designs to sabotage CPEC is perhaps one of the motives of Chinese assertive move, and it also warns India that joining an anti-China alliance is tantamount to be an adversary of Beijing. It has cost India what: a 45-year peace with China!

Although there have been several factors which have prevented both India and China from a major military confrontation, “economic deterrence” has a far greater role. India-China bilateral trade volume has been 89.6 billion dollars during the year 2017-18. It is quite certain, neither side wants to lose a potential trade partner by tensing their economic relations owing to strategic differences. Both India and China will maintain their economic engagement notwithstanding the recent border standoff.

Finally, India’s quest for regional supremacy has brought both India and China at the cusp of confrontation. No wonder indeed, India has been emboldened by growing US-India strategic partnership to contain China and to become the regional dominant power by changing regional power configuration. Stripping Kashmir’s special status has been a part of India’s growing geopolitical interest in the region. These developments have escalated tensions between China and India that have resulted in Ladakh standoff. A more destructive collision seems to be imminent between the two as long as India does not abandon its pursuit of regional supremacy through obstructing Chinese geopolitical interests.

The writer is an analyst based in Islamabad