* 'One thing we really uncover in the book and kind of pull the curtain back on is, some of the leaks that came from within the palace,' he claimed, specifically citing 'royal courtiers' 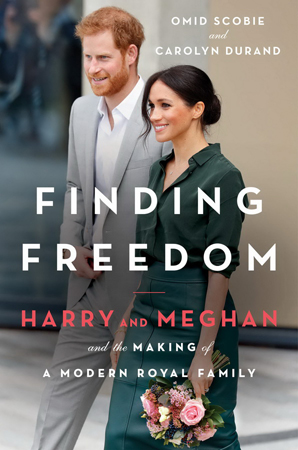 The reality of the royals. The highly anticipated biography Finding Freedom: Harry and Meghan and the Making of a Modern Royal Family offers a deep-dive into Prince Harry and Meghan Markle’s life together, and it finally hit shelves earlier this week.

It’s because of these leaks and what Scobie described as the royal family’s “no-comment policy,” that Harry and Meghan “never get to reframe the narrative.”

“And it did a lot of damage, particularly when Meghan was pregnant,” he told Daily Pop co-host Morgan Stewart. “I know that she struggled during that time.”

Even when it comes to the couple’s decision to step back from their royal duties, most of what’s been explained to the public has come from “the royal side,” Scobie said.

“You know, we hear from palace sources, royal aides; We very rarely hear from those close to Harry and Meghan,” he explained. “And I think this book really gives us insight into why they made the decision they did.”

As the reporter’s pointed out numerous times before, he nor his co-author Carolyn Durand interviewed Harry and Meghan for the book. Instead, it’s said to be based on the accounts of more than 100 people, which were gathered over the course of two years.

“I think the unique situation we had here was, a lot of people in their lives felt that the friends and the colleagues they knew, were very different to those characters being described in the pages of the British tabloids,” Scobie said. “And so they really wanted to speak up for them.”

Regardless of anyone’s good intentions for contributing to the book, the author admitted that he doesn’t think Harry or Meghan will be reading it any time soon.

It’s because of these leaks and what Scobie described as the royal family’s ‘no-comment policy,’ that Harry and Meghan ‘never get to reframe the narrative’

“I think for a couple that lived some of these very traumatic experiences, a book like this is probably the least appealing read of all time,” Scobie told Morgan. “But I have heard from those that contributed to the book-sources close to the couple, friends of the couple-they feel that now that some of these stories that are out there, that have kind of balanced the narrative a little bit, maybe provides us with some sort of catalyst for change.”

Of course, there’s also a number of bright spots throughout the biography, too. “We found out that they hid their engagement for three months; [Harry] made a special promise to Meghan on a trip to Botswana,” Scobie revealed. “So there are sort of like a mixture of things.”

This mixture includes more information on not just the couple’s relationship, but also Harry and Prince William’s.

“We definitely unpack in the book what went wrong between Harry and William-and it’s obviously a tragic story because, of course, they once were so close,” Scobie noted. “There’s certainly a distance between the brothers. And William, you know, wears two hats. He’s an older brother but he’s also a future king.”

“And sometimes that dedication to his duty to the monarchy has gotten in the way with his relationship with his brother,” the author added. Ultimately, Scobie believes that today, Harry and Meghan are “certainly in a happier place.” “They have the freedom to use their voices the way they want and it’s definitely the beginning of a new chapter.”