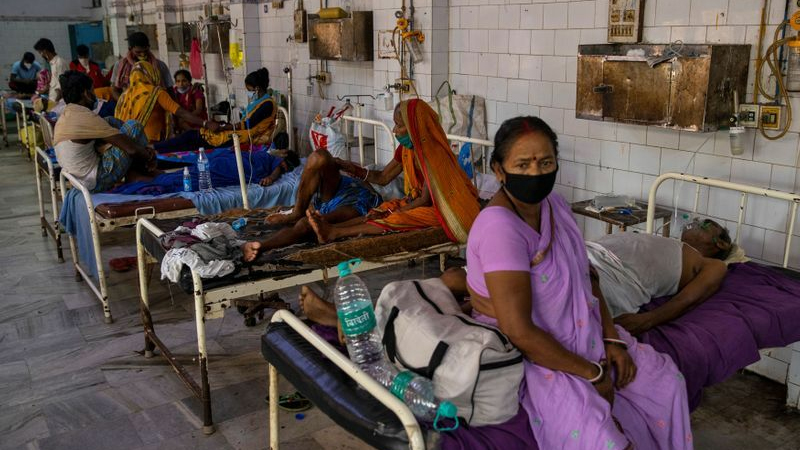 Guards armed with rifles escort Dr. Kumar Gaurav as he makes the rounds at his hospital on the banks of the Ganges River.

The guards are there to protect him from the relatives of patients, including those suffering from COVID-19. The relatives keep barging into the wards, even the ICU, to stroke and feed their loved ones, often without wearing even the flimsiest of masks as barriers against the novel coronavirus.

“If we stop them, they get angry,” he says. “They want to give homemade meals to their patients, and some even want to massage their patients. And they are taking the infections from our ICUs to the other people in the society.”

He stops to tell the wife of a patient in the ICU she must leave. She obeys, only to return after a few minutes from another entrance.

It’s the monsoon season, and the humidity is reaching unbearable levels. But the few air conditioners in the hospital aren’t working, and some relatives use hand fans to keep their loved ones cool in wards dirty with garbage and discarded protective equipment.

It wasn’t supposed to be like this for Kumar.

Nine years ago, the 42-year-old psychiatrist moved his family back to his hometown for a quieter life and better pay after three years in the Indian capital, New Delhi. He accepted a job as a medical professor and consultant psychiatrist at the 900-bed Jawahar Lal Nehru Medical College and Hospital, named after India’s first prime minister. Life was uneventful but rewarding, spent teaching classes and visiting his psychiatry patients.

Now, with some doctors struck down by the coronavirus and others refusing to work, he has been named the top official at the hospital, despite being one of its most junior consultants – and suffering from diabetes and hypertension, two risk factors for severe COVID-19.

But he says he felt compelled to volunteer for the job.

“A lot of my colleagues refused,” he says. “I had to take up the responsibility.”

In April, as the pandemic struck here in the eastern state of Bihar, the hospital was selected as one of just four COVID-dedicated hospitals for a population of 100 million people – at least in theory.

In practice, Kumar says the nearest hospital with proper critical-care facilities is around 200 kilometers (120 miles) away. And with proper healthcare in the surrounding rural areas difficult to find, general patients have nowhere else to go but his hospital.

In June, Kumar says, the district administration instructed the hospital to treat uninfected patients, too.

“In an ideal world, there should not be any non-COVID patients in this hospital,” Kumar says.

The healthcare system in Bhagalpur, like many other parts of Bihar, is on the verge of collapse, he says.

Interviews with dozens of staff, patients and relatives at the hospital paint a picture of conditions that might shock those accustomed to images of hermetically sealed ICUs during the pandemic, with relatives not even allowed to touch their dying loved ones.

They tell of a chronic shortage of manpower and resources such as blood and medicines. All 37 beds in the ICU are occupied; on the floor next to one of the beds, a relative sits on a brightly colored blanket he has brought from home, a water bottle by his side.

Kumar says he feels powerless to prevent the lapses in isolation of the COVID patients.

“We don’t know who is positive and who is negative,” the psychiatrist says. “We don’t know their status and we cannot wait for them to be tested. They just need the treatment. We are the most vulnerable population.”

As infections slow in many other countries, India is still reporting more than 50,000 cases per day. Its total of more than 2 million cases trails only the United States and Brazil, and cases show no signs of slowing. Since the pandemic struck India, more than 46,000 people have died.

Although India’s major cities, such as New Delhi and Mumbai – the first to be hit by the virus – have registered a decline in cases, numbers in second-tier cities and rural areas continue to rise.

The state has a rich history, including the site where the Buddha is said to have attained enlightenment beneath the shade of a Bodhi tree.

But today, Bihar has a reputation as one of India’s problem-plagued states.

Based on indicators including infant nutrition, Bihar’s level of development has more in common with sub-Saharan Africa than India’s prosperous southern states. Almost half of children under 5 in the state are stunted from malnutrition, with more than four in 10 underweight for their age, according to federal data.

Bihar also has the highest population growth in India, and one of the worst education systems, scoring poorly on indicators including adult literacy, the percentage of children attending school and exam results.

The healthcare system was overburdened even before the pandemic struck. Dr. Sunil Kumar, the Bihar secretary of the Indian Medical Association – the main healthcare union in India – said more than half the doctors’ posts in the state are unfilled. That’s because many doctors don’t want to serve in rural areas, according to Bihar’s top court, which urged the state government to do more to fill the roles in a ruling in May.

There have been around 87,000 confirmed cases of coronavirus in the state and 465 deaths – relatively small compared to other states. Given the low testing levels in the state, the numbers may be conservative.

Still, Bihar’s healthcare system is already close to breaking point, unlike places such as New Delhi, which has had many more cases but enjoys better resources.