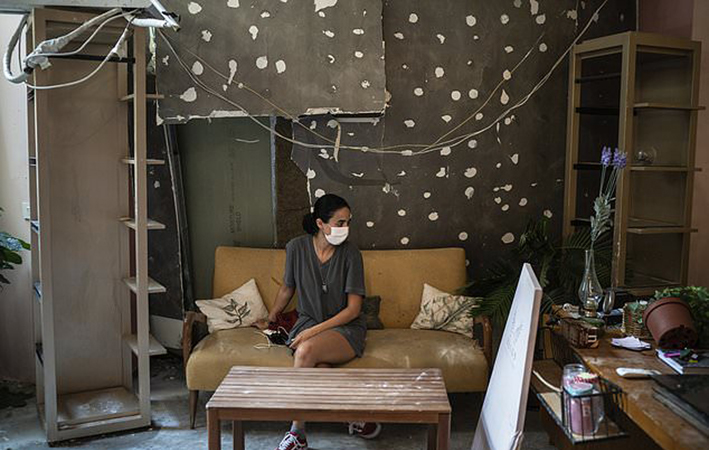 For nearly a week, Mona Zahran had to sleep on a couch pulled across her apartment’s front door. Beirut´s massive explosion knocked her doors off their hinges and shattered her windows, and she feared looters would take advantage of the chaos that has hit the Lebanese capital since.

It was the latest and probably most humiliating blow in the turbulent life of the 50-year-old.

A few months ago, Zahran lost her last income as a seamstress because of the combination of anti-government protests, Lebanon´s economic collapse and coronavirus restrictions.

Now the Aug. 4 explosion at Beirut´s port threatened to rob her of her home as well.

“It is no shame to be poor. But this home is the only thing I have left,” said Zahran.

Through past political instability, Lebanese always somehow kept their way of life unshaken. This time, it seems to have been wiped away. Over the last 10 months, Lebanese have had to deal with a dizzying series of events that have upended an artificial sense of security.

Lina Mounzer, a Lebanese writer, said Lebanon has been slowly sinking into a “terrible state” as the post-war project built by warlords and war profiteers and channeled toward “100% profit” with no public or social services goes bankrupt.

With the financial crisis draining the country, poverty now affects nearly half of the population, up from about 20% two years earlier. The banking system – once the jewel of the economy – is in tatters. Unemployment is soaring.

The explosion, she said, propelled the Lebanese “into a parallel timeline.”

“Everything we were able to imagine belongs to one world and now we are in the world of the unimaginable,” she said. “It is incomparable to anything that any of us has lived before. And we have been through wars.”

Zahran´s three-story family home is in Karantina, one of Beirut´s poorest neighborhoods, overlooking the port.

When the blast hit, Zahran was showered with flying glass as she lay on her couch. She started screaming for her late mother.

She was transported back to her childhood, when Karantina was heavily hit in the 1975-1990 civil war. Her first panicked thought was that she would have to leave her home again, as her family did in 1976, when she, her four siblings and parents lived in a crowded hotel room for years.

Then she ran through the house, checking on her relatives. Her 60-year-old brother was buried in glass, bloody from cuts, as were her nephew and cousin. Luckily, the blast only blew out windows and doors and caused cracks in a bathroom and a bedroom.

“It was the definition of terror,” said Zahran. “The only thing that provides us security is this house.”

These past years haven’t been easy. Zahran looks after her retired brother, who has no pension after years of working as a cleaner for a state security agency. He tried to take his own life a few years ago, so she has to watch him closely.

She lost one source of income a few years earlier when the army stopped using her services sewing insignia on uniforms. Earlier this year, hit by the protests and coronavirus restrictions, a boutique for wedding and evening gowns stopped sending her work, ending her last income, about $200 a month.

Now she lives off help from relatives.

With no immediate state aid for clean-up, it was volunteers going house to house who finally put in a temporary, wooden front door for free this week.

For Zahran, Lebanon´s politics are too complicated. One thing she is sure of: “Our rulers are not worthy of this country.”

Volunteers have cleared away the shattered glass. But the salon, her dream investment in Lebanon, was in ruins, the walls blasted open. Small glass shards were still lodged in Boumelhem´s legs. Her younger sister, hit in the head by gypsum board blown out of the salon walls, is in the family´s home village recovering.