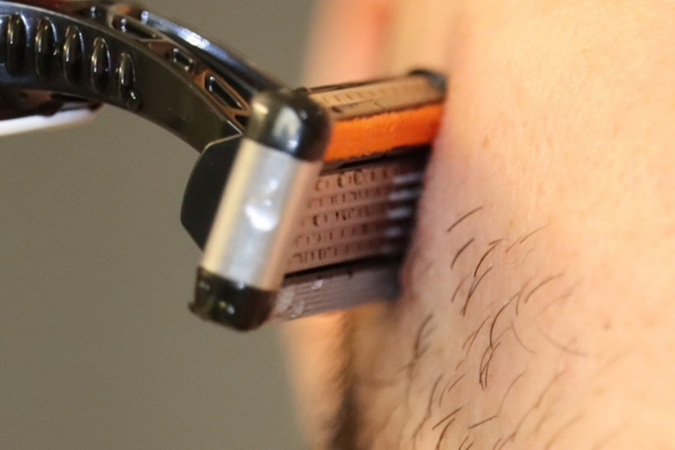 A team of engineers at MIT led by C. Cem Tasan has discovered why steel razor blades go dull even when cutting hair that’s 50 times softer than them. Using an electron microscopic, they found that under the right conditions a single hair can chip a blade edge.

One of the more frustrating of everyday mysteries is why razor blades go dull as quickly as they do? Intuitively, stainless steel blades should last longer than about a week. Because they are made to cut through soft hairs, they should last for months and, if they’re coated with even harder materials, they should last even longer.

However, razor blades don’t last and other steel blades, like knives and scalpels, also go dull even when used exclusively on softer materials. According to MIT, this is because there’s more going on than a simple wearing down of metal, such as happens when a blade is rubbed against something harder, like a whetstone. Instead, what happens is that if a razor blade strikes a hair under the wrong conditions, it becomes stressed, cracks, and then chips due to a mechanism called stress intensification. This chipping leads to more cracks, leading to more chipping in a cascading cycle, ultimately resulting in a very dull razor and an unpleasant shave.

“Our main goal was to understand a problem that more or less everyone is aware of: why blades become useless when they interact with much softer material,” says Tasan, the Thomas B. King Associate Professor of Metallurgy. “We found the main ingredients of failure, which enabled us to determine a new processing path to make blades that can last longer.

“We are metallurgists and want to learn what governs the deformation of metals so that we can make better metals. In this case, it was intriguing that, if you cut something very soft, like human hair, with something very hard, like steel, the hard material would fail.”

To learn more about what happens when a blade meets hair, MIT graduate student Gianluca Roscioli shaved with disposable razors and then examined the blades under a scanning electron microscope. When he did so, he found very little wear or rounding. He did find chipping, but this wasn’t consistent along the edge.

In a more sophisticated test, Roscioli constructed a micro-mechanical apparatus made up of a movable stage and two clamps to hold a commercial razor blade and to anchor test hairs of various diameters donated by lab colleagues. In operation, the device would cut at various depths and angles, and it could fit inside the electron microscope.

An analysis of the magnified blades showed that they did not chip when they cut the hair perpendicularly but did so more often when the blade met the hairs at an angle. Computer simulations derived from the collected data showed that it wasn’t just the angle was important, but also the consistency of the steel in the blade. If metal varied along the edge, this produced weak spots where chips could occur.