Lack of study and oversight raises concerns about tear gas 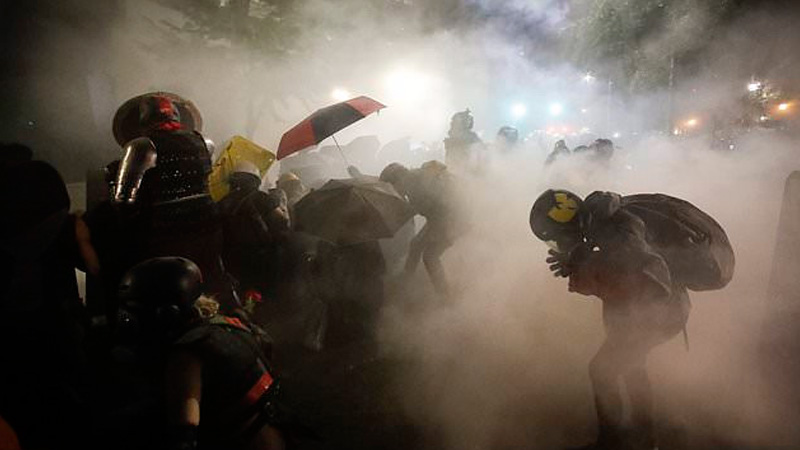 On June 2, Justin LaFrancois attended a protest against police violence and racism in downtown Charlotte, North Carolina, where he planned to livestream the event for his alternative newspaper´s website.

Shortly into the march, police, who reported that water bottles and rocks were being thrown at them, unleashed a volley of tear gas on the entire crowd, including those who were marching peacefully. The protesters tried to run. But hemmed in by tall buildings and desperate for an escape route, they tugged at the closed gate of a parking garage, pulling it up just high enough so they could slip inside to escape the pepper balls and exploding flashbangs. “Oh, my God,” LaFrancois said in a video that captured him wheezing hard and coughing from exposure to the gas. “My face is on fire. My eyes are on fire.” The Charlotte protest was one of the dozens around the country during the past few months where police unleashed tear gas on peaceful protesters. Tear gas has commonly been used as a defensive tool by law enforcement to make rioters disperse.

But during the nationwide Black Lives Matter protests, federal, state and local law enforcement agencies have sometimes been using it offensively, including against peaceful protesters, children, and pregnant women, without providing an escape route or piling on excessive amounts of gas, witnesses and human rights advocates say.

Without it, “the only thing left to do is physical force – shields and batons,” said Deputy Police Chief Jeff Estes of the Charlotte-Mecklenburg Police Department. Estes said he´s been exposed to tear gas and pepper spray many times.

“So, I know the effects. I would rather have that than see what we´ve seen in other places where people who are violently assaulting other people have to get hit with sticks and shields,” Estes said.

But interviews by The Associated Press with medical researchers, federal regulatory agencies, and a review of U.S. government-funded scientific studies raise questions about the safety of the gas, especially its use on individuals in confined spaces, in excessive quantities, and when it´s fired directly at protesters. Medical professionals interviewed by the AP said the use of tear gas is particularly concerning during the COVID-19 epidemic. The AP also found that there is no government oversight of the manufacture and use of tear gas. Instead, the industry is left to regulate itself.

“I think this is deeply problematic because there´s no transparency around the manufacture or the sale of these weapons,” said Rohini Haar, an emergency room physician and researcher at the University of California School of Public Health in Berkeley who has published studies on tear gas. “The U.S. has an obligation to protect its citizens. We regulate so many other things. This is an actual chemical weapon.” Haar said her research shows that tear gas has also been getting stronger over the years. She said she is particularly concerned about the unknown health effects of silicon that is sometimes added to tear gas to make it last longer in the air and on surfaces.

The AP reached out to the five leading tear gas producers in the United States. Four never responded to repeated requests for comment. A fifth, the Safariland Group, declined an interview request through a public relations firm but noted that the company was divesting Defense Technology, its tear gas maker, to its current managers in the third quarter of this year.

Tear gas was developed around World War I and is banned in warfare by the Chemical Weapons Convention, ratified by almost every country in the world including the United States. But it allows chemicals classified as riot control agents, including tear gas, to be used for law enforcement.

However the provisions of the agreement don´t regulate what counts as a riot-control agent, said Anna Feigenbaum, author of the book “Tear Gas: From the Battlefields of World War I to the Streets of Today.”

“And they ignore or fail to address offensive use of such agents by law enforcement,” Feigenbaum told AP. Tear gas works by using a host of chemicals that render individuals unable to function by causing irritation to the eyes, mouth, throat, lungs, and skin.

But despite its widespread use, medical experts say there are few studies on the health effects of tear gas, and many focus on the impact of crowd control irritants on military personnel, a population that tends to be healthier and in better physical condition than the general public. The U.S. Army even moved to protect its own troops after a study published in 2014 showed that recruits exposed to tear gas in basic training had a nearly 2.5-times greater risk of being diagnosed with acute respiratory illness. The Army reacted by lowering concentrations of tear gas and shortening exposure times for the training.

A 2014 study funded by the Environmental Protection Agency, the Department of Defense, and the National Academy of Sciences did try to specify levels of tear gas concentrations that can cause irreversible damage or death.

But Sven Eric Jordt, an associate professor and researcher at Duke University’s School of Medicine who has long studied tear gas, is critical of the study, saying it merely recommended levels that should not be exceeded and relied heavily on research that´s a half-century or more years old.

Furthermore, officials aren´t going out and measuring tear gas concentrations in the streets, Jordt said. He said the development of highly concentrated pepper extract resin, or OC, which is deployed in spray cans or canisters, are touted as being safer than the more common version of tear gas – known as CS – but “there is no research backing this up.” The American Thoracic Society is calling for a moratorium on tear gas, citing the “the lack of crucial research, the escalation of tear gas use by law enforcement, and the likelihood of compromising lung health and promoting the spread of COVID-19.” Thor Eells, executive director of the non-profit National Tactical Officers Association, said in a telephone interview the substances are so safe that even if a police department used its entire inventory at one time, no one would be killed or sustain serious injury. Eells has taught tear gas use with a Colorado police department and with Defense Technology, a tear gas manufacturer.

“An agency will not have enough of the chemical munitions in their current inventory to come even close to being dangerous,” he said.

In Portland, Oregon, which has been an epicenter of Black Lives Matter protests, several people exposed to tear gas have reported severe reactions. Samira Green, who was pregnant, and her husband Andy found themselves trapped between spewing canisters fired by Portland police on June 2. They tried to run through the clouds of tear gas, which is actually a powder that hangs in the air. Green then sat down on the pavement, unable to move. “Literally, you cannot breathe anything. It is clenched,” Green later told AP while making a fist near her sternum, showing how her lungs seemed to seize up. “I was coughing and coughing and throwing up. I´m like, this is how I´m losing my kid. That´s it.” Green and her husband are suing the city of Portland. Despite their fears, she didn´t go into early contractions or miscarry.

“The only way as a citizen that we can hold them to account is to file a lawsuit and hopefully inflict enough financial damage on them that they´re forced to make changes to these types of things,” Andy Green said. Kat Mahoney, a legal observer with the ACLU of Oregon, was also exposed to tear gas during the June 2 demonstration in Portland. She had previously been exposed numerous times and is certain the version used this time was much stronger. Driving home after the protest on her motorcycle, she began involuntarily convulsing and couldn´t shift gears. Once home, she said was barely able to open her door, couldn´t count past six, and was unable to open a tube of toothpaste, according to her separate lawsuit.

Asked if Portland police deployed more powerful tear gas, spokeswoman Lt. Tina Jones declined to comment, citing the litigation. Protesters aren´t the only ones impacted by tear gas. Brendan Deiz, a 33-year-old teacher and musician, was at home in bed when Portland police fired tear gas several blocks away in the predawn hours of June 26.

“All of a sudden I started choking and my eyes started watering, my throat started burning in the middle of the night, and I realized that I was smelling tear gas coming up through my window AC unit,” Deiz said in a telephone interview.

He aired out the house and cleaned the filters in his air conditioner, but that wasn’t enough. The room still smelled of tear gas and he would wake up with a sore throat, coughing up phlegm and feeling dizzy. He had to sleep on a couch downstairs until professionals cleaned the bedroom, including ozone treatment, at a cost of $3,000. He is trying to get reimbursed from the city and his insurers. “Clearly this is an excessive use of chemical weapons, as it´s coming into people´s windows that are blocks away in the middle of the night,” Deiz said. Hannah Waller, who lives in a Seattle neighborhood that was occupied by Black Lives Matter protesters for three weeks, said tear gas also seeped into her apartment.

“Because of where my apartment is located, tear gas got into my apartment on numerous occasions and covered surfaces, leaving residue that would continue to affect me for days,” Waller told AP by email. Thirteen U.S. senators, concerned about federal officers using tear gas, rubber bullets, and other so-called less-lethal weapons, have called on the Government Accountability Office to study the use and safety of tear gas.