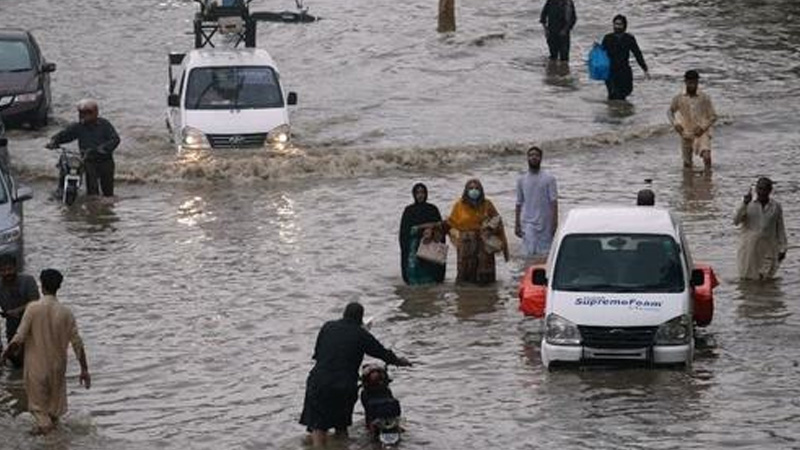 At least seven people died in separate incidents in Karachi on Friday as the fourth spell of monsoon rains continued to lash parts of Sindh for the second straight day.

Six of the deceased lost their lives due to electrocution, while a 12-year-old boy died after drowning in rainwater. Another boy was reportedly swept away by currents while swimming in a drain filled with rainwater and rescue efforts were underway to save him till the evening, according to officials and rescue services.

According to the Provincial Disaster Management Authority, rain was also recorded in varying amounts in the Hyderabad, Sukkur, Shaheed Benazirabad, Larkana and Mirpurkhas divisions, with Shaheed Benazirabad receiving a maximum 50.5mm of rain.

In Karachi, a 24-year-old woman was electrocuted in Baloch Colony area. Area Station House Officer Ihsan Channa said Farzana Hanif died when she suffered an electric shock inside her home In Junejo Town. The body was shifted to the Jinnah Postgraduate Medical Centre (JPMC) to fulfil legal formalities.

In another incident, an 18-year-old, Kaiser Nawaz, died due to electrocution at a shop in Landhi-4, an Edhi Foundation spokesperson said.

A 30-year-old man also died after suffering an electric shock on a street near Jangian Hotel in Chakiwara area of Lyari, according to a Chippa spokesperson. The body was shifted to Dr Ruth Pfau Civil Hospital Karachi (CHK).

An eight-year-old boy died when after suffering an electric shock from an electricity pole near City Courts, an Edhi Foundation spokesperson said. The body was shifted to the Civil Hospital.

A 20-year-old, Jawad Zubair, received current in rain-accumulated water near the Burns Centre of CHK and died.

In Model Colony, Mohammed Bilal, 27, died of an electric shock. His body was brought to the JPMC. Dr Seemin Jamali while quoting his friend said that Bilal was electrocuted when he touched a pole.

Meanwhile, a 12-year-old boy drowned in a pond of accumulated rainwater in Sujrani Town. Police said some children were swimming in the pool in Sector 7-D when Talha Tanzeem, 12, drowned and died.

In a similar incident, a six-year-old boy was swept away while swimming in a drain in Banaras area of Orangi Town, according to Edhi Foundation and Pirabad Police.

West Senior Superintendent of Police Fida Husain Janwari said they had received information about the drowning of the boy in a stormwater drain. The area’s DSP and SHO along with divers of Edhi were trying to rescue the child. As intermittent rain continued in the city, Karachi Mayor Wasim Akhtar along with other officials visited various areas in the South district and monitored the operation for de-watering of accumulated rainwater and clearing of choking points.

On Thursday, at least one person was reported dead due to electrocution while another was injured during rain in Karachi.

To prevent the roads from being inundated as seen during last week’s heavy rains, the National Disaster Management Authority (NDMA) has been working to clean Karachi’s major storm-water drains on Prime Minister Imran Khan’s directives.

On Friday, the ruling PTI’s Islamabad chapter shared a video of the cleaning of nullahs being carried out for the fifth day under NDMA’s supervision.