Norwich suffer two reds and own goal in loss to Burnley 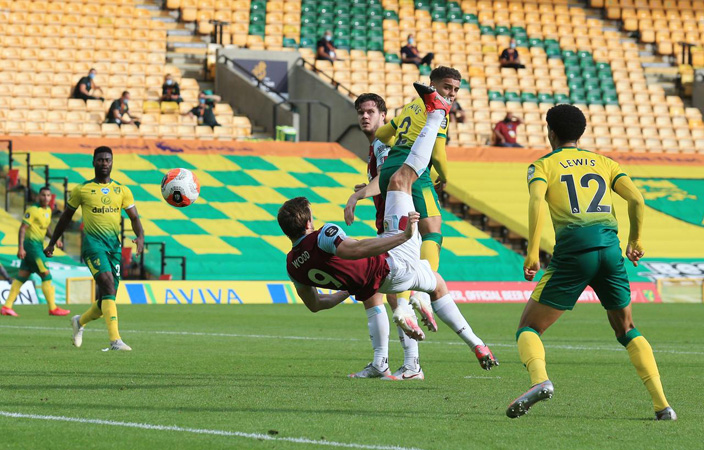 NORWICH: Relegated Norwich City endured a nightmare final Premier League home game of the season as they had two men red-carded and conceded an own goal in a 2-0 defeat by Burnley on Saturday. The bottom club’s hopes of ending a miserable eight-game losing streak evaporated in a crazy end to the first half with Emiliano Buendia sent off after 35 minutes for an elbow and Josip Drmic following him 10 minutes later for a lunging tackle. As if that were not bad enough, Burnley took the lead in the fifth minute of first-half stoppage time when Chris Wood’s bicycle kick crept past goalkeeper Tim Krul. Norwich showed spirit after the break to frustrate Burnley but their wretched afternoon was summed up in the 80th minute when defender Ben Godfrey turned a cross into his own net. Victory lifted Burnley above Arsenal into ninth place with 54 points from 37 games, two points behind sixth-placed Wolverhampton Wanderers who have a game in hand. Sixth spot will earn a Europa League place. Norwich became the third team in English top-flight history to lose five consecutive home games without scoring a goal and the first since Birmingham City in 1922. The Canaries also extended their record league losing sequence to nine and will end the season with the lowest points tally in the club’s history. Burnley have set records too but more positive ones as for the first time they have won 15 Premier League games in a season. Goalkeeper Nick Pope also leads the way for Premier League clean sheets this season with 15. While Norwich have earned respect for their attractive style of play this season, if only 21 points with one game remaining, their defeat at Carrow Road was ugly. Buendia needlessly brought his elbow down on Ashley Westwood’s head and was shown a red card after referee Kevin Friend watched the incident back on a touchline monitor. Drmic was then dismissed after launching himself at the ball and going in high on Erik Pieters, two minutes before Wood’s improvised, if scuffed, effort gave Burnley the lead. Godfrey’s unfortunate own goal was cruel on Norwich who had worked very hard to emerge with some pride.